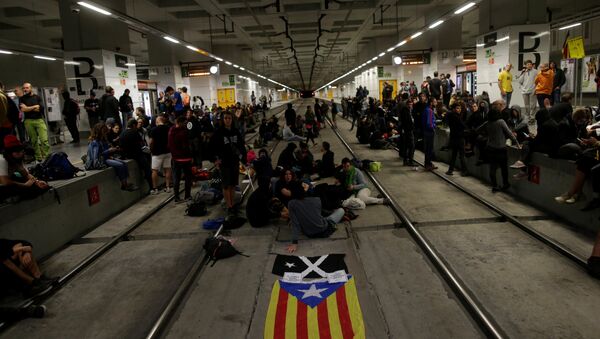 At least twenty four people were injured in clashes that engulfed Barcelona ahead of the anniversary of Catalonia's independence vote.

Radio Sputnik has discussed the current mood of Catalonians in regard to the region's independence a year after the referendum with Dr. Carlos Flores Juberías, constitutional law professor and political analyst at the University of Valencia.

Sputnik: A year on from the vote, how united are Catalans in their bid to go through with the independence?

Carlos Flores Juberías: The chances that a new referendum will happen are zero. On the one side, the government has clearly said and there's unanimity in the government and the opposition parties that they are not going to accept any referendum on independence. On the other side, when Pedro Sanchez, the Prime Minister, suggested the possibility of putting to referendum a new statute of autonomy, a new law in order to increase self-government for Catalonia but not granting independence, guess what, pro-independence party said no.

Madrid Summons Belgian Ambassador Over Flemish Parl't Speaker's Letter - Reports
They don't want to vote on a new project, not even to say no. Those who for many, many months were claiming that "we have a right to vote, it's normal in democracy to vote, we only want to vote", when they are suggested to vote on anything but independence they suddenly decide that they don't want to vote anymore. And finally the third reason is, what for. There was a fake referendum in 2014, there was another fake referendum in 2017. What would be the use of another fake referendum with no guarantees of transparency, of participation and of fairness?

Sputnik: Who has the most to gain from independence? Why is there so much resistance to re-negotiating the terms of the relationship between Catalonia and Spain?

Carlos Flores Juberías: Because at this point there's not even the grounds for an agreement. One of the most troubling signs of recent developments in Spain is the radicalization of oppositions on both sides of the political spectrum. On the one side Catalan nationalists are now more and more radical since they are in the opposition and they are more and more adamant about independence and less willing to accept anything short of independence.

New Catalan Government to Be Sworn in on Saturday
On the other side, there is a growing amount of Spanish citizens, not only in Catalonia but somewhere else in many other places in the country, that are now really pushing for a re-centralization of the state that now believe that what has brought us to this situation of crisis and chaos is the policy of appeasement with Catalan nationalists; the policy of giving the Catalan nationalists what they have been asking once, and another time, and another time.

And they want to go back to devolve competences to the state, to curtail self-government not only in Catalonia but in many other places and to re-centralize and strengthen the central state. At this point, positions are farther and farther than ever before; and here the only possible point of consensus is what we already have — the actual situation.

French Ex-Prime Minister Valls to Run for Barcelona Mayor
Sputnik: Is there any chance that Brussels could become a more active mediator in this crisis? Why have they not been more involved in this situation?

And finally, Brussels cannot be a mediator because Brussels is standing with Spain; it's backing the position of Spain which is a loyal member of the EU while Catalonia is not. So the European Union is not impartial in this conflict and it has made it very clear many times that the EU is supporting the internal unity and the national integrity of Spain as it is the case with any other member state.

The views expressed in this article are solely those of Dr. Carlos Flores Juberías and do not necessarily reflect the official position of Sputnik.