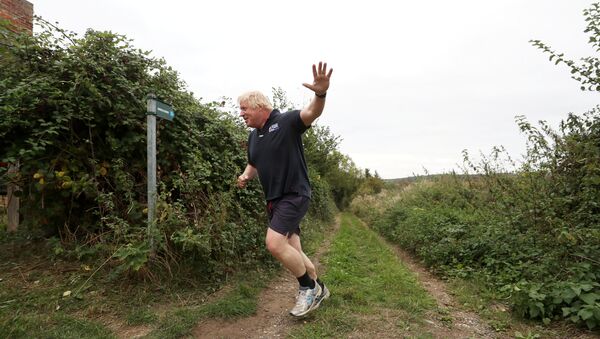 Over a year ago, UK Prime Minister Theresa May famously revealed that the “naughtiest” thing she had ever done was running through fields of wheat as a kid.

Former UK Foreign Secretary Boris Johnson has rocked the Internet after being pictured running through a yellow meadow – something which many social media users deemed to be a sophisticated trolling of his bête noire Theresa May.

In an interview with Julie Etchingham of ITV’s Tonight program, the UK prime minister spilled that she’d run through fields of wheat when asked about the naughtiest thing she’d ever done.

While it might not be an actual field of wheat, Johnson’s stunt has sent Twitter into meltdown, with some saying that was a “sucker-punch”:

Now I don't like Boris at all but this one right here is a sucker-punch 😂😂😂 https://t.co/KRnea9vD4i

I don’t believe it, King! Boris Johnson is in a wheat field! Theresa May is not gonna like this! pic.twitter.com/YWk6lEaJzk

And runs through a field of wheat better than May

The Catcher in the Rye

Others dismissed the politician as a “clown,” calling him immature:

Boris Johnson is off his nut. Trolling May, running through a field of wheat 😂 pic.twitter.com/DZU1vh8ikI

That clown was Foreign Secretary once eh?

#BorisJohnson trolling May by running through a field of wheat — with that level of maturity of course we should trust his #brexit plans 🙈 pic.twitter.com/Ep3zTV1sZp

Some netizens seemed to be more concerned about the fact that it was not an actual field of wheat:

@IsabelHardman what a legend “ it’s not even a field of wheat, as an amateur botanist I’ve identified a number of meadow plants in the background including hemlock and field bind wheat!” 😂😂😂 @BorisJohnson being as inaccurate as ever! #ConservativePartyConference

Sorry to p#ss on people fireworks, but that's not wheat:P

Another user suggested that he could do whatever soothed his soul as long as he didn’t share pics of him doing “the naughtiest thing” he’d ever done:

Theresa May’s interview caused quite a stir last year, with users coming up with the craziest memes to mock her “confession”:

— "Never have I ever run through a field of wheat"@theresa_may pic.twitter.com/WcCJUSQGAl

Legend states, If you say "field of wheat" 3 times in a mirror, 1992 Theresa May appears and tries to sell you Avon pic.twitter.com/6c3xYDVsrq

When you remember them maddddd times in the fields of wheat pic.twitter.com/dLXGNwuvJ4

nice wheat field you've got there. would be a shame if somebody… ran through it pic.twitter.com/dYwr4pDD2z