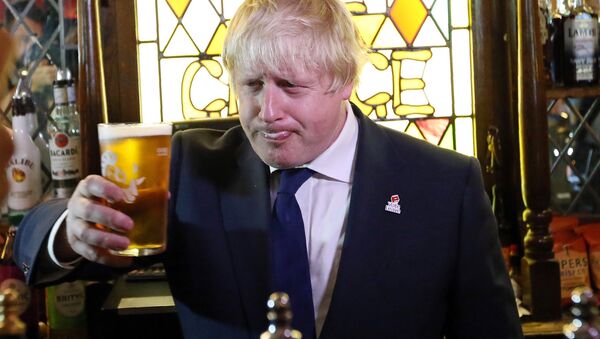 Despite the recently surfaced mockery by the members of the Conservative party against the former Foreign Minister Boris Johnson, he still tops the list of candidates to succeed as the next UK leader, according to a new poll.

A survey by the ConservativeHome blog revealed Boris Johnson still reigning as top choice to replace Theresa May, following another poll conducted in August 2018.

Following a series of diplomatic and political blunders, while in office as Britain's top diplomat, Johnson's approach to politics was recently blasted by the UK Finance Minister.

Philip Hammond criticized Johnson for being "incapable" of grown-up politics and following on the details of issues at hand.

"Boris sits there and at the end of it he says, 'Yeah but, er, there must be a way, I mean, if you just, if you, erm, come on, we can do it, Phil, we can do it. I know we can get there'. And that's it," he said. "You know? No rebuttal of the arguments. We just have to want it a bit more, we just have to wish a bit harder, we just have to be a bit more bullish and it will all be fine.' But it won't all be fine because we are dealing with grown-ups here and we have to deal with the real-world situation we face," Hammond said.

The UK Home Minister Sajid Javid, who came second in the ConservativeHome poll, has also slammed Johnson — for his suggestion that the high-speed railway project HS2 should be scrapped to build a bridge to Ireland.

Following his resignation from the UK Cabinet, when he slammed and rejected May's Chequers plan on the future of Brexit deal with the EU, Johnson has become a prominent columnist with The Telegraph, causing controversy and discussions over the content of his articles.

"Nonetheless, he is still at the top of the table," the poll noted.

Responding to the survey's results online, commentators spoke out on the idea of Johnson's reign in Westminster.

Johnson's plan "for a better Brexit" has come under fire last week. Ministers in Westminster called the his 'super-Canada' plan — an alternative to the Chequers agreement — "unworkable."