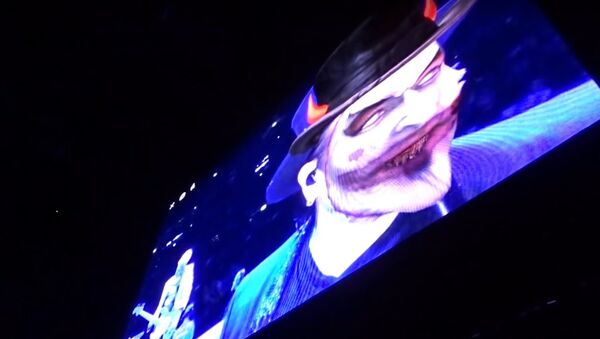 For the second time this month, the U2 lead singer likened the Swedish Democrats to Nazis, this time also taking a jab at Denmark, as well as other European nations with a strong presence of right-wing parties.

During a much-anticipated and fully booked gig in the Danish capital of Copenhagen, U2 leader Bono, who proudly launched the recent world tour by waving the EU's starred banner, has unleashed a tirade against European right-wingers, starting with the host nation itself.

"Denmark, I have forgotten about your splendid colonial ways, but I see you're finding your own form. Forget Borgen [a popular Danish TV show]. You're banning burqas and confiscating jewelry from those awful asylum seekers. Bravo!" Bono said, using the guise of a fictional devil character.

In recent years, Denmark's center-right government comprised of the Liberals, the Liberal Alliance, the Conservatives and the right-wing Danish People's Party introduced harsher immigration laws, tightening citizenship laws and launching a campaign toward better integration of newcomers, which seemingly irked the pro-diversity and multiculturalist-leaning celebrity. Denmark also had a brief stint as a colonial power in the 17th century, acquiring overseas possessions in America, Africa and Asia.

Bono then went on to call Hungary's Prime Minister Viktor Orban a "lovely man," whereupon he performed a Nazi salute shouting out the name of the Sweden Democrats' leader Jimmie Åkesson, "next door in Sweden." This move was first debuted during a Paris gig on September 9 following the Swedish general election, the Sweden Democrats' most successful so far, when Bono also ventured that "boring" Swedes had started to discover their "Aryan potential."

The fictional character MacPhisto was pioneered by Bono in the 1990s as a tool for poignant social commentary using a posh upper-class English accent to get his point across.

U2 is currently in the midst of the eXPERIENCE + iNNOCENCE Tour staged in support of the band's 2017 album. Ahead of the European leg of the tour, Bono stated his wholehearted support for the EU and promised to fly its flag during the group's shows. Bono stressed that "as a European" he felt proud of the Germans welcoming "frightened Syrian refugees," as well as proud of "Europe's fight to end extreme poverty and climate change."