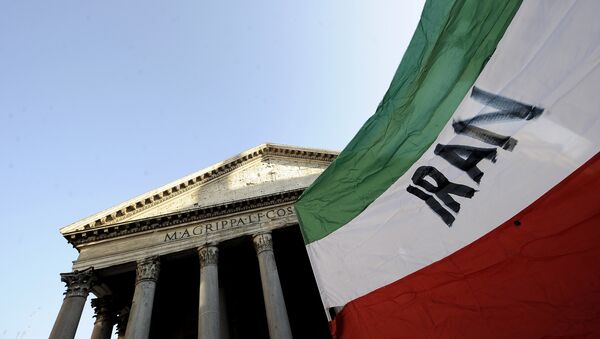 The US is looking to revive an idea of creating an anti-Iranian bloc of Arab nations to counter the latter’s purported malign activities in the region.

This comes as Israeli Prime Minister Benjamin Netanyahu told the UN session that Iran had a secret facility, which it used to stockpile large amounts of equipment and material for a secret nuclear weapons program.

Sputnik: What is your take on the credibility of Netanyahu's UN speech?

Ely Karmon: Well it's quite clear that it exists, we must remind your public that the archives were found several months ago in January actually and a third of it, which was extracted to Israel, was passed also as copies to many European countries and the United States and it's not far from there, I'm sure it was possible for the Mossad agents which worked on the field to enter this facility also but because it was radioactive material clearly they couldn't take the risk and also they couldn't sabotage it because they understood the consequences for the population of Tehran.

Sputnik: Why do you think we didn't hear anything about this six months ago? Why have we not heard anything from the nations that were allegedly informed of this? And why is there no action taken by the IAEA?

Ely Karmon: First of all, we must understand that this was very sensitive intelligence and Israel had to give its approval to publicize such kind of information and the decision was to do it for political reasons clearly at the United Nations. Second, I think at least on the European side we see there is no real will to challenge the Iranian policy and I think Netanyahu also reminded of the terrorist attack on French soil that was by the way foiled by Israeli intelligence, there was arrest of diplomats in Austria and Germany and still we don't see a clear European reaction.

I think that the problem with the International Atomic Energy Agency is that even in the past it renounced the visit to for instance very important military facility at Parchin which was visited only once in 2005 as a kind of agreement before the signing of the agreement with other partners and since then they renounced to visit military sites, especially the Parchin site and accepted that the Iranians will take soil examples and will pass it in 24 days to the International Atomic Energy Agency.

Clearly this was a strategy by Iran to go away without a real inspection, and the question is indeed because they received this information about the warehouse; we already know that 15 kg have been extracted by the Iranians from there and we clearly don't know what remains of it, and clearly there is an operation to try and clear it up as it happened in 2004 and 2005 in Parchin where there were very important construction works to clean the military base from any sign of nuclear activity.

Sputnik: Donald Trump is seeking to revive an idea of an anti-Iranian alliance of Arab nations; how interesting is that to Israel?

We're supporting the Egyptians in their fight against Daesh or ISIS in Sinai, we are supporting Jordanians against not only Daesh but against past attempts by the Syrian regime to occupy Jordan in the 70's, so I think that the Gulf states and Saudi Arabia and the Emirates, especially, see in the Iranian activity in Syria, in Iraq, and in Yemen a threat to their security and to their regimes also, so under this background clearly they see Israel as part not of an alliance, because I don't believe there's a real alliance with Israel, there are common strategic interests and common activity that can help the interests of the states in the region and I think the main players, actors are Saudi Arabia and Emirates, there's a problem with Qatar, by the way, which Is playing a double game.

I think you've mentioned that they have a big American base, and at the same time they have quite good relations with the Iranians, and Egypt, Jordan, even Morocco, they support the Gulf countries because they that the Shia religious bloc is not only a strategic attempt of hegemony by Iran but also religious hegemonic aggressiveness, and I think this is a kind of coalition which has common interests and will probably develop into something more pragmatic or more realistic if the issue of the Israeli-Palestinian conflict could be not resolved completely, but at least advance in understanding and negotiations between the Israelis and the Palestinians.