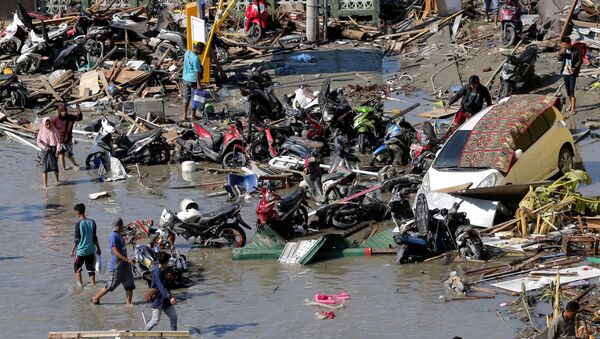 © AP Photo / Tatan Syuflana
Subscribe
The disastrous earthquake and tsunami, which hit Sulawesi, has left more than 830 people dead. Among them there’s a 21-year-old towerman, who reportedly stayed behind in a crumbling building to ensure that a passenger aircraft could take off safely, while his co-workers fled to safety.

Air controller Anthonius Gunawan Agung, who worked at an airport near the tourist city Palu, which was recently struck by a 7.5 earthquake and tsunami in Indonesia, has been hailed a hero as he remained in his crumbling tower to ensure a passenger plane with hundreds aboard would be able to take off safely.

According to the Sun newspaper, while others fled, the young staffer, who was only 21 years old, stayed behind, as Batik Air flight 6321 was taking off when the island of Sulawesi started to tremble. As soon as the plane took off, the tower started to shake violently and the man decided to jump off the four-storied building, fearing he would be buried under the rubble otherwise.

The controller, who broke a leg and got severe internal injuries, was taken to hospital, but reportedly died the next day.

The death toll of the devastating earthquake and tsunami with six-meter-high waves is 832 people, killed in crushed buildings or by waves, while rescue operations continue. Thousands are seeking shelter and need clean water.

The authorities expect this numbers to jump after rescuers reach areas closer to the epicenter, where hundreds of thousands of people live. Meanwhile, in the tourist city of Palu, dozens remain trapped in several hotels and a shopping mall, crying and calling for help, according to  reports.

The suspected failure of a warning system, set up across the island state, during the disaster has come under scrutiny. The meteorological and geophysics agency BMKG has been criticized for lifting the tsunami warning too soon. It was called back 34 minutes after it had been issued, although officials debate it was still in force when the waves hit the shore in Palu at speeds of 800 kph. Tragically, at the time hundreds of people gathered on Palu’s beach, where a festival was held.