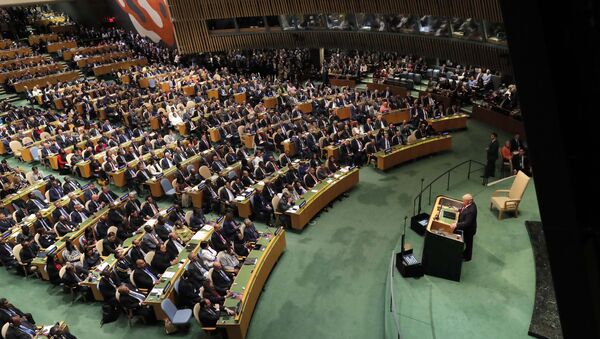 Speaking at the United Nations General Assembly this week, US President Donald Trump urged the world to respect US sovereignty while seemingly threatening to violate the sovereignty of other coutnries. Speaking to Sputnik, US geopolitical analyst Tom Luongo outlined what he believes is the fundamanetal contradiction in Trump's worldview.

Sputnik: What is your take on Foreign Minister Lavrov's discontent with the West's "unilateral approach" to world politics which he said hinders the creation of a multipolar world?

Tom Luongo: I think we've taken a very dangerous turn here in the US, with Donald Trump and his neoconservative cabinet trying to dictate to the world exactly what we want at all stages. This just feels to me like this is the final lashings out of an empire that doesn't understand that everybody else has already moved on, and are just trying to figure out how they can minimize the damage while they do so.

Trump Urges Respect for Sovereignty in UN Speech Despite Illegal Presence Abroad
Sputnik: Do you think that this Trumpian unilateralism and resistance to the multipolar nature of the modern world is actually backfiring in some ways and causing countries to move away from the US and forming new alliances?

Tom Luongo: Yes, that's absolutely what's going on, and part of me almost feels like Trump is doing this on purpose. Donald Trump is a very interesting and mercurial figure, and I'm both happy and sad that he's my president, because he's like half good and half bad. I do believe that he feels that the current geopolitical world order that the US has been paying for since the end of World War 2, the post-WW2 institutional order, doesn't work for the United States anymore.

But I also feel that at a certain level, he doesn’t quite understand that we also don't have a manifest destiny to tell the world how it's going to run, and how it's going to operate, either. That's a conflict between the practicalities of the real world, and I hate to use the term, but Donald Trump is the quintessential baby boomer in that respect. He really has that kind of messianic American exceptionalism burned into his psyche. And while it's laudable at a certain level, it can also be really toxic if taken to an extreme.

So I really think that with his personality being the way it is, and his negotiating style, that some of what he's being doing is real bluster, and some of it is real – his real honest anger.

Mr. Lavrov's comments are just more of the same of Russian diplomacy, and I think Mr. Lavrov right now is not just the top Russian diplomat, but honestly the top diplomat in the world, and without him, the world would be a much more dangerous place. I have tremendous respect for his ability to bring people together and forge alliances that need to be made in response to aggression on a number of fronts, including not just by the United States, but the European Union as well.

It's very interesting to see how this is all playing out, and you can see the backlash in the special purpose vehicle that's being developed by the EU, China, Russia, etc. in order to get around Iran sanctions that are pending in November.

But it's a bigger issue than that and is also to ensure that there are no sanctions put on the five oil majors and all the contractors helping to build the Nord Stream 2 pipeline. So if Trump does change his mind about putting sanctions on, there will be a vehicle for everybody to get paid.

Hungary's PM: Trump's UN Speech Marks End to US 'Desire to Impose Will on World'
Sputnik: Russia's foreign minister also spoke about the need to resolve all of the existing issues through diplomacy. Do you think that President Trump embraces this concept of solving international problems through diplomacy, through sitting down, or does he believe that pressure is the way to go?

Tom Luongo: I think that Trump believes in both pressure and negotiation. I think he knew from the time he took over as president, once he got briefed on it, that the North Koreans had developed a nuclear weapon. At that point, all US leverage of the threat of military invasion, of regime change, ends. We in the libertarian anti-interventionist right have been saying this for thirty years.

Once they got the nuclear weapon, all the leverage goes away, because we have to negotiate. That's why the Koreans, South Korean President Moon Jae-in and Kim Jong-un started the peace process, and the US was really along for the ride. All Trump then had to do was create a mechanism through which he could save face to American voters, in order to get out the situation, and then defy his cabinet, who want all of these issues to remain as open wounds for as long as possible; because that's how they sell more weapons around the world, that's how they are able to fundraise as the Republican or Democratic parties.

Russia’s Lavrov Warns UN Against Unilateralism in Treating World’s Old Wounds
It's all part of this rampant and insane corruption that exists in the American political system. It's all open wounds that are meant to stay open, and closure on them is anathema to the guiding lights in Washington, to everybody's interests in Washington. And that's the biggest problem, that's the biggest impediment to world peace.

I think Trump wants to solve these problems, but his negotiating style (read Art of the Deal), is effectively to insult his interlocutors, the people he's negotiating with, up until the point that they say 'that's enough' and walk away from the table. Then he negotiates. Once he doesn't have leverage, he comes to a conclusion pretty quickly. I don't think he's ever going to put sanctions on the Nord Stream 2 pipeline…He's going to threaten, he's going to try and continue to retard investment into Russian equities and Russian corporate debt and whatnot, but I don't think it's going to do him any good, and he knows it.