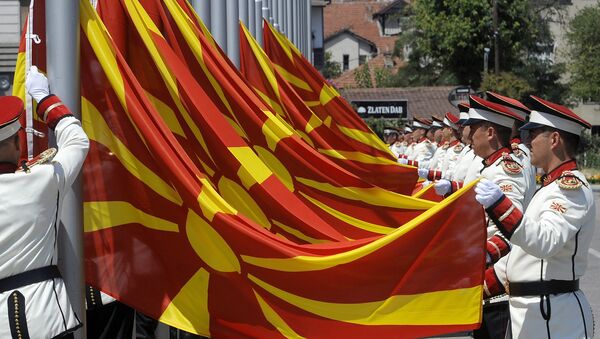 © AP Photo / Boris Grdanoski
Subscribe
International
India
Africa
MOSCOW (Sputnik) - Referendum on name change from the Republic of Macedonia to the Republic of Northern Macedonia will be held in the country on Sunday.

Almost 2 million citizens will head to the polls to answer the question "Are you in favor of European Union and NATO membership by accepting the agreement between the Republic of Macedonia and the Republic of Greece?" For the results of the referendum to be valid the turnout must be at least 50 percent.

The referendum was scheduled following the signing of an agreement on renaming of the country to the Republic of North Macedonia by Macedonian and Greek foreign ministers on June 17. The document thus put an end to a 25-year dispute over the use of "Macedonia" name, which Greece has been objecting as this is also the name of one of its regions.

Referendum is Likely to Result in 'Yes' Vote

Macedonia's President Gjorge Ivanov has decried an agreement that would change the country's name calling on his compatriots to boycott the vote on the deal that takes place on September 30. At the same time, the EU enlargement commissioner, Johannes Hahn, delivered an impassioned speech urging the Macedonians to vote in referendum to change their country’s name to the Republic of North Macedonia.

EU Commission: Macedonia's Name Vote Should Be Free From Foreign Influence
Professor of Political Economy at Department of Economics in the University of Macedonia Stavros Mavroudeas told Sputnik that the pressure upon the citizens of small Macedonia for the "yes" vote exerted by both the United States and the European Union was incredible.

"I expect that the ‘yes’ will prevail in the FYROM referendum on the Prespes Lakes’ agreement … All the important EU leaders have passed from the country and pressed unbashfully for the acceptance of the agreement. The US also did the same," Dr. Mavroudeas said.

The expert noted that in normal circumstances such actions of the Western powers would amount to blatant foreign intervention in internal affairs reminiscent of colonial powers.

Vice President of the European Parliament and head of the Greek ruling SYRIZA party’s delegation Dimitrios Papadimoulis in his comments to Sputnik expressed strong support to the "yes" vote at the referendum.

"We are strongly supporting Prime Minister Zoran Zaev’s government to that end, and we do believe that a positive outcome from the referendum would be beneficial for FYROM’s EU integration process," Papadimoulis said.

The lawmaker also stressed big support to the great commitment that Greek and Macedonian governments have shown toward reaching a mutually beneficial agreement after more than two decades of stagnation and nationalist decline.

Dr. Mavroudeas added that there was a small possibility that voters’ participation might not be massive enough so as to legitimize the result, however, it has already been declared that in this case the deal would be put for vote in the parliament.

"Western powers are very determined to impose the agreement which puts another brick in making the Western Balkans the West’s ‘backyard,’" the expert added.

Consequences of ‘No' Vote

World
Mattis to Fly to Skopje to Show US Support for Macedonia Joining NATO - Pentagon
In early August, a group of about 30 civic associations, political parties and NGOs, led by the United Macedonia party, launched a campaign for boycotting the name deal referendum. The so-called crisis headquarters is now made up of more than 70 organizations, political parties and patriotic movements, according to the party’s president Janko Bachev.

"I would say that a negative outcome would not be the best option for FYROM, its efforts to accelerate EU integration process and deal with a number of social and economic issues," Papadimoulis said.

In turn, Dr. Mavroudeas expressed his opinion that a ‘no’ vote would throw into disarray Western plans in the Balkan area.

"It won't necessarily create more instability than that already existing. One positive aspect would be that EU’s and NATO’s grip in the area will be weakened," the expert said.

Papadimoulis stressed that in case of the deal acceptance by Macedonia’s citizens a new chapter of cooperation would be opened in relations between Greece and Macedonia and both countries could work closely in good spirit to deal with all issues.

"I believe that the deal between Greece and FYROM is a good deal, one that puts forward the interests of both countries and enhances security and good neighborly relations," the lawmaker said.

"Unfortunately, the purpose of this agreement is not this [to bring friendship between the people of the two countries]. It has been pushed upon both countries by the big Western powers in order to control the situation in the Balkans," the expert said.

Concerned About Russian ‘Mischief,’ US Defense Secretary to Visit Macedonia
He added that the EU and the US were trying to close issues in the area in order to engulf it in the EU and NATO and that the Prespes agreement is part of this strategy along with the idea of a land exchange between Serbia and Kosovo.

"In fact, the Prespes agreement has fomented nationalist and far-right trends in both countries and actually worsened the possibility of amicable relations between the people of the two countries," Dr. Mavroudeas said.

What Will Macedonia's EU And NATO Membership Bring

"Regional security will be strengthened, bilateral and multilateral cooperation will be advanced and the entire Balkan region could enter into a new era of enhanced cooperation," Papadimoulis said.

The lawmaker added that political, economic, commercial synergies could multiply something important for all adjacent states.

However Dr. Mavroudeas expressed opinion of no benefit in Macedonia’s participation in the EU and NATO.

"The participation in the EU would make the weak and already dependent FYROM economy even weaker. Greece and other euro-peripheral economies have a bitter taste from this participation that made their economies weaker and simple appendages of those of the euro-core economies," Dr. Mavroudeas said.

Way the Referendum Over Macedonia Naming Formulated Is 'Scam in Itself' - Author
The expert highlighted that the people of Macedonia would probably learn through the hard way something that the Greek people learned similarly, that the EU instead of gifts and wealth brings pain and poverty.

"Moreover, NATO is always the long arm of US aggression and its record is well-known. Instead of stabilization and peace it brings conflicts and war," the expert stated.