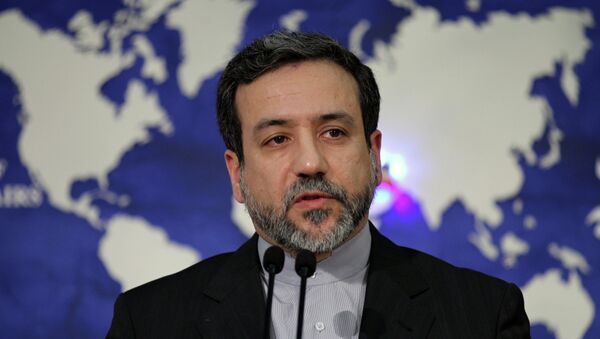 MOSCOW (Sputnik) – Tehran expects that the EU mechanism of transactions with Iran, aimed at circumventing the US sanctions against the Middle Eastern country, will be in place before the next round of the restrictions comes into effect in early November, Iranian Deputy Foreign Minister Seyyed Abbas Araghchi said.

On Monday, the EU foreign affairs chief, Federica Mogherini, said that the foreign ministers of the remaining signatories to the Joint Comprehensive Plan of Action (JCPOA) had agreed to create a Special Purpose Vehicle (SPV) that would facilitate trade between European companies and Iran amid US sanctions against Tehran. Mogherini explained that the legal entity would be established to enable European companies to continue legitimate transactions with Iran in accordance with the EU legislation. On Tuesday, Mogherini said the SPV could be in place before November.

"In line with the European negotiations, the mechanism of the banking and trade transactions will be implemented before the second round of the US sanctions begins … The Europeans should set up the proposed mechanism before the announced US sanctions against the oil and banking sectors [come into force] on November 4. Or, at least, its structure should be determined and the implementation of a part of these mechanisms should begin," Araghchi said in an interview with the IRNA news agency, published late on Friday.

New Bill Seeks to Bar Funds for US War on Iran Without Congressional Approval
The JCPOA, commonly referred to as the Iran nuclear deal, provides for the gradual removal of the western sanctions against Iran in exchange for Tehran abandoning its nuclear weapons program.

The US withdrawal from the Iran nuclear deal and the re-introduction of its sanctions have repeatedly been condemned by Tehran which has maintained it complied with the JCPOA requirements.