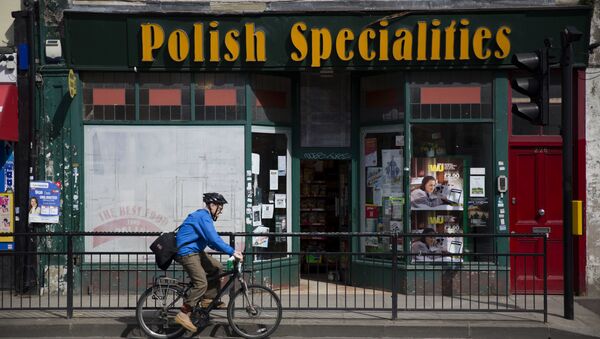 A booklet implying migrants from Poland travel to the UK for "free healthcare" and "better schools" has infuriated parents of schoolchildren in London.

"It is really disturbing that they are giving children biased information that isn't based on any statistics," a Polish mother has reportedly said in response to the worksheet handed out to year 8 Geography students at Walthamstow Academy.

A section of the handout passed to Walthamstow students earlier this month described the "problems" caused by Polish immigration, including "pressures on the NHS", "many languages" in schools, "informal work" and "unemployment for locals".

The Polish mother of a 12-year-old student, who got the booklet, said:

"I found it deeply shocking and offensive that they targeted only one nation while talking about immigration."

Following the accusation of spreading "Brexit propaganda", the school has apologized "wholeheartedly" for the offensive incident and agreed that parts of the handout were "inaccurate and insensitive."

The 2016 vote in Britain to leave the European Union saw a surge in hate crimes and xenophobia towards eastern and central European migrants living in the UK. The Polish community not once found itself on the receiving side of British intolerance.

Polish is the most common non-British nationality in the UK and in 2016 the number of Polish nationals resident in the UK reached 1 million, the Office of National Statistics figures reveal.

In contrast to the anti-immigrant arguments of Brexiteers, also reflected in the examples listed in the Walthamstow Academy booklet, European migrants living in the UK contribute £2,300 more to public purse each year than the average adult.

A report on fiscal impact of immigration on the UK by Oxford Economics, also suggested European migrants contributed £78,000 to the exchequer over their lifespan in the UK.