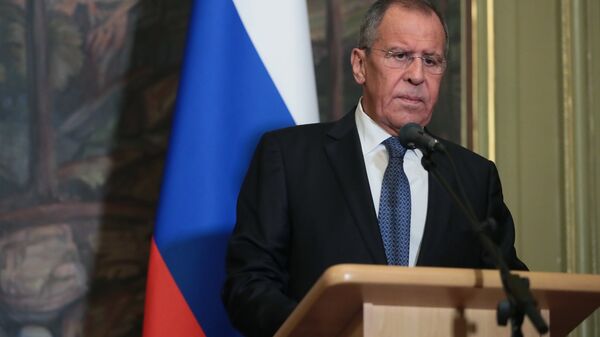 "Despite complexity of the situation in Syria, Iraq, Yemen, and Libya, we must not lose sight of the age-old Palestinian problem. A fair solution is crucial if we want the entire Middle East to recover. I want to warn against a unilateral approach and attempts to monopolize the peace process," Lavrov said.

The Russian top diplomat underscored the need for a consolidated global effort to restart peace talks between Israel and Palestine, guided by UN resolutions and aided by the Arab community. Russia would work toward peace within the Middle East Quartet and other regional groups, Lavrov added.

The Russian foreign minister also expressed concern about attempts to undermine the potential settlement of the Israeli-Palestinian conflict under the so-called two-state solution.

"We never abandoned the mechanism that was universally endorsed for mediation — the quartet… We see what is going on, it's a persistent attempt to dismantle all the basic cornerstones of the potential deal on the two-state solution, and this is a cause of concern," Lavrov said at a press conference at the United Nations after his Friday speech.

World
Russian Foreign Minister Lavrov Speaks to Press on UNGA Sidelines (VIDEO)
Lavrov offered cautious praise for the progress on the Korean Peninsula and called on the UN Security Council to encourage the rival Koreas to meet each other halfway and deliver on their bilateral promises.

The diplomat added that Moscow was committed to multilateral Korean peace process that would guarantee durable security in Northeast Asia.

Speaking about the sanctions against North Korea at a press conference, Lavrov expressed solidarity with China's point of view that these restrictions should be lifted in order to encourage progress in the negotiations on the denuclearization of the Korean Peninsula.

The minister urged numerous UN agencies to step in and help the Syrian warring parties resolve problems "in the interests of all Syrians with no double standards."

Lavrov also warned Islamists and their allies against using chemical weapons in Syria.

The diplomat reiterated that the goals of Iran, Russia and Turkey in Syria were different, but the three ceasefire guarantor states were allies in the fight against terrorism in the war-torn country.

Speaking about the situation about the Syrian Idlib province, which remains the last insurgency stronghold in the country, Lavrov told reporters at a press conference that Russia could guarantee that the humanitarian catastrophe would never occur in the region.

"We will be acting very carefully in order to minimize any possible risks for the civilian population," Lavrov added.

World
Lavrov at UNGA: Russia Warns Against New Chemical Weapon Provocations in Syria
Moreover, the minister covered the issue of the Syrian Constitutional Committee. Pressure on UN Special Envoy for Syria Staffan de Mistura with regard to requiring the hasty creation of this committee was counterproductive, Lavrov suggested.

On Iran, the Russian foreign minister again lashed out at the United States for pulling out of the 2015 nuclear deal between Tehran and six world powers, saying Russia would work to keep the pact alive.

The foreign minister reaffirmed Tehran’s full compliance with the agreement.

Moscow was involved in creating the mechanism of transactions with Iran aimed at circumventing the sanctions that Washington has been re-imposing on Tehran after the former’s withdrawal from the Iran nuclear deal.

World
Guterres Reiterates Support for Russian-Turkish Idlib Deal to Lavrov
On Ukraine, Lavrov reiterated Russian support for sending UN troops to protect OSCE monitors in the buffer zone and accused authorities of cherishing the idea of sending troops to occupy breakaway eastern provinces of Luhansk and Donetsk in violation of the Minsk peace accords, aimed at the settlement of the conflict in the region.

"We support the OSCE mission in Ukraine and are open to giving it the protection of UN [troops]. But… those sponsoring the authorities in Kiev must bring their proteges back to their senses, make them end the Donbas blockade and discrimination against ethnic minorities across Ukraine," Lavrov said.

During the press conference, the foreign minister suggested that US Special Representative for Ukraine Negotiations Kurt Volker was promoting ideas that undermined the Minsk agreements.

Russia's Support for Serbia in Balkans

On the Balkans, Lavrov bashed the United States for trying to "transform" UN-approved military presence there into their permanent base and assured Serbia of Russia’s support in finding a viable solution to its row with Kosovo.

"Kosovo armed forces are being formed. Agreements reached by Belgrade and Pristina with EU mediation are violated. Russia calls on the sides to engage in a dialogue in line with UNSC Resolution 1244," Lavrov pointed out.

The Russian diplomat slammed US and EU leaders for pro-NATO campaigning among Balkan nations, saying this ran counter to their dislike of foreign meddling in other countries’ home affairs.

World
NATO Chief Says Discussed Military Drills, Further Contacts With Russia's Lavrov
During the press conference, Lavrov welcomed the meeting between four leaders of the Libyan parties in Paris in May and expressed support for the settlement efforts of UN Special Envoy Ghassan Salame and UN Secretary-General Antonio Guterres.

Lavrov noted, however, that setting up artificial deadlines for elections in the conflict-torn country was not wise since the vote should be held when all political forces were ready to accept its results.