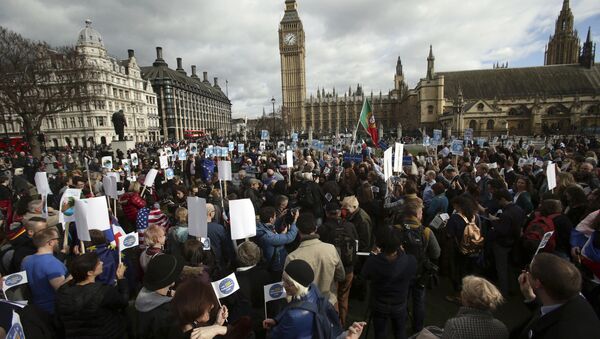 Sputnik spoke to Abby Dwommoh, spokeswoman for the United Nations International Organization on Migration (UN-IOM) in the UK, who dispelled many misconceptions on migration often cited within Britain's media establishment.

Sputnik: How have migration flows to the UK changed since the migrant crisis began in 2015? Where do they currently stand?

Abby Dwommoh: The UK continues to have positive net migration, although overall figures have fallen from their peak in 2015 and 2016.  In the year ending March 2018, 270,000 more people came to the UK than left it, according to the most recent Office of National Statistics report published August 2018.  EU migrants coming to the UK have been at their lowest since 2012, according to the same study.

There is an existing misconception that the majority of migrants come from the poorest countries or region. In fact, this is not the case.  Approximately one-third of migrants move within the global South and over a fifth of migrants move across developed countries.  The UK has the eighth largest diaspora in the world, with approximately 5 million British migrants living abroad.  Migration is a global phenomenon and one that cannot be viewed as only one-directional.

Sputnik: What are some of the largest factors contributing to mass immigration to Europe and the United Kingdom?

Abby Dwommoh: Migration is a human reality that is as old as man.  It is necessary and desirable when driven by choice, rather than desperate necessity, and managed in a safe, smart and orderly manner. The percentage of international migrants has remained roughly 3 per cent of the global population since 1990.

It is important to note that the majority of migration to the EU (and to the UK) is through regular means. The number of irregular migrants arriving to Europe are at a multi-year low.  Even at its peak, the numbers were manageable, especially when countries acted in solidarity with frontline states.  More legal pathways for migration would reduce the number of migrants and refugees risking their lives through irregular migration, and could have very real benefits for both receiving and origin countries.

There is no simple answer as to why one would decide to migrate. The motives for migrating are multiple and complex, including aging demographics, labour shortages, economic imbalances, advances in communications and transportation, climate change, desperation and disasters (both natural and man-made). The number of unprecedented simultaneous, complex and protracted crises and humanitarian emergencies throughout the world further contribute to the established drivers of migration.

Limited opportunities for safe and regular migration drive migrants into the hands of smugglers, feeding an unscrupulous crime that threatens the lives of vulnerable people. We must establish humanitarian and legal avenues that provide alternatives to dangerous movements via land or sea and provide clear and accurate information about the risks of irregular migration

Sputnik: What are the benefits and challenges that mass migration can bring to a country?

Abby Dwommoh: When well-managed, migration can fuel innovation, diversity and growth in incomes and living standards.  Companies such as Google, Intel, PayPal, eBay and Yahoo! have all been co-founded by migrants. Patent applications in Europe are higher in countries with policies to attract highly skilled migrants and foreign students in higher education. This also increases the patenting activity of the native-born population as well.  With the networks of diaspora members, diffusion of knowledge and the presence of a more diverse workforce makes innovation more likely.

Economically, a recent British independent report by the Migration Advisory Committee (MAC) found that migrants pay more in taxes than takeouts. Of the migrants who arrived in 2016, they will contribute approximately £26.9 billion to the UK's public finances over the entirety of their stay.

There is no ‘one-size fits all' approach to migration policy as the demographics, education, governance system, and population dispersion (to name a few) are unique to each nation. Rather, countries must develop a comprehensive, long-term, multifaceted "whole-of-government" and indeed "whole-of-society" migration and asylum policy.  This involves bringing in all relevant ministries at the national level including labour and employment, development, environment, security and justice, and bringing in key non-governmental stakeholders including employers and the business community, civil society service providers, advocates, and unions, as well as migrants and diasporas themselves. The last few years have made evident that ad hoc policies and knee-jerk reactions to migration can fuel xenophobia, increase divisiveness and impede integration, thus having negative impacts on the economic, social and cultural benefits migration can bring.

The IOM also understands that immigration can bring challenges to societies and local communities and the concerns some citizens have. This underlines IOM's position that it is imperative to improve migration governance across the board, including increasing opportunities and integration measures.

This must be done in close cooperation with citizens, residents, businesses and civil society. Given the historical evidence of the positive impact of migration, we are concerned that migrants and migration often get unfairly blamed for structural or systemic problems not of their doing.