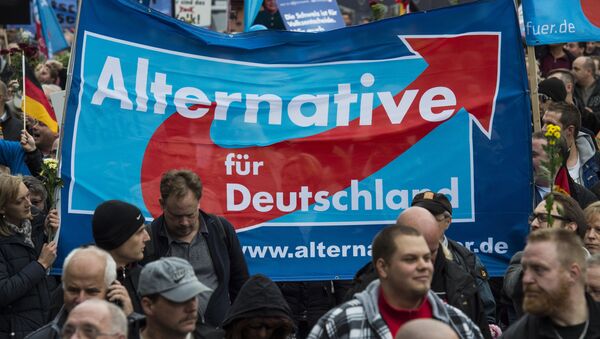 © AFP 2023 / JOHN MACDOUGALL
Subscribe
International
India
Africa
Suliman Mulhem
All materials
With the EU going through a period of transition, as Britain looks to leave the bloc and populist parties continue to gain traction across the continent, Sputnik reporter Suliman Mulhem spoke to Thomas Röckemann, leader of the Alternative for Germany (AfD) Party in the North Rhine-Westphalia state, about the union’s uncertain future.

Outlining his thoughts on Brexit, Mr. Röckemann expressed support for the UK’s decision to withdraw from the EU, explaining that the bloc does not offer “real democracy” as it is run by unelected eurocrats and fails to appropriately take into account population size when allocating seats for member states in the European Parliament.

“The European Union is not a democracy. The fundamental principle ‘One man, one vote’ does not apply in Brussels. Germany’s representation in the parliament, for example, is ridiculously small, given our population figure. Without real democracy, there cannot be a good future,” the senior AfD official told Sputnik on Friday.

With regard to Brexit negotiations, the AfD politician suggested the EU is being difficult and perverse to discourage other countries from leaving, describing the British government’s proposals for a free trade arrangement without open borders as reasonable.

“Instead of respecting the British vote, Brussels is giving the British people a hard time. They have to set an example, of course, so others won’t follow suit.”

AfD MP Says Protests 'Urgently Needed' in Germany to Rectify Merkel's Mistakes
Indeed, it makes sense for the EU not to offer the UK a favorable deal, pushing it toward a no-deal Brexit, especially given the rise of Eurosceptic, populist parties in many member states, pondering if EU membership is worth it.

Furthermore, Mr. Röckemann said he expects the remaining member states to be forced to pay more to Brussels due to Brexit, as the UK was a net contributor, making remaining in the union even less attractive.

“To compensate for Brexit they will now rip off the remaining members some more, instead of revising down the budget. But they cannot compensate for the ideological loss. After all, Britain is on its way out, and so far, it did not collapse. So, Brexit remains a breakthrough. More signs of EU disintegration and friction can be seen, mostly, of course, in the migration issue,” he added.

“The migration issue is what really wakes people up. People no longer buy the propaganda. Why should the EU be the guarantor for freedom when it cannot even control its own borders?”