Cross-Examination Aimed to ‘Impugn the Credibility’ of Kavanaugh Accuser 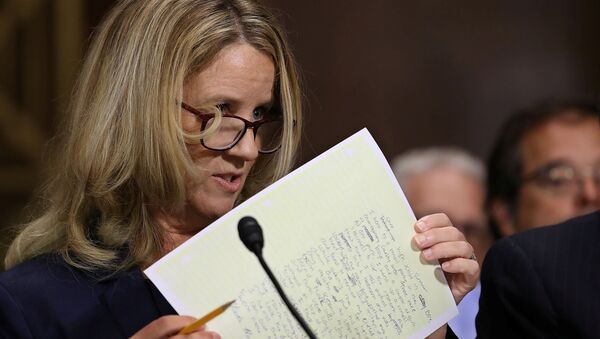 © REUTERS / Pool/Win McNamee
Subscribe
Thursday on Capitol Hill, Dr. Christine Blasey Ford testified before the Senate Judiciary Committee about her allegations that Brett Kavanaugh, for whom the committee is weighing a nomination to the US Supreme Court, attempted to rape her during a 1982 high school party. Kavanaugh, in turn, defended himself against the allegations.

Ford, an American professor of psychology at Palo Alto University and a research psychologist at the Stanford University School of Medicine, told senators that she was "terrified" but felt it was her "civic duty" to testify. She said she "agonized daily" over whether or not to come forward, fearing "my single voice would be drowned out."

Kavanaugh, a US Circuit Judge of the United States Court of Appeals for the District of Columbia Circuit, denied the allegation "immediately, categorically and unequivocally." Calling the proceedings "a national disgrace," he indicated he has no intention of withdrawing his nomination.

While Ford was the first, she is far from the only woman to come forward with allegations about Kavanaugh's sexual misconduct. Three other women have also made allegations, including that he exposed himself to them and that they witnessed him taking part in gang rapes of drugged girls in high school, Sputnik reported.

Sen. Lindsey Graham Blasts "Sham" Kavanaugh Hearing: "This is not a job interview, this is hell!" pic.twitter.com/u4iamAZPbl

​Meanwhile, Republican senators and US President Donald Trump rallied to Kavanaugh's defense, with South Carolina Senator Lindsey Graham calling the investigation a "charade." Trump tweeted Thursday evening as the hearings ended that "Kavanaugh showed America exactly why I nominated him," saying that testimony was "powerful, honest and riveting."

Judge Kavanaugh showed America exactly why I nominated him. His testimony was powerful, honest, and riveting. Democrats’ search and destroy strategy is disgraceful and this process has been a total sham and effort to delay, obstruct, and resist. The Senate must vote!

Boghosian told host Brian Becker that Ford has a "disarming honesty" and that her "forthrightness" and "neighbor-next-door persona" did much to dispel beliefs that she had been "put up to this."

"Any woman watching this has to be thinking," Verheyden-Hilliard said, that the whole episode "really confirms why a woman does not come forward and talk about being sexually assaulted, because this is what you get put through."

"Who would do this to themselves?" she said, "What she's having to go through, what her family's having to go through because she's talking about an assault on her. And bringing in this prosecutor to cross-examine her because they didn't want to have the image of these old white men sitting there cross-examining her, so they thought they could bring in a woman and make it look better; I don't really think it makes it look any better."

https://www.spreaker.com/user/radiosputnik/all-eyes-on-washington-as-dr-ford-kavana
​Boghosian said Rachel Mitchell's cross-examination was "deposition-like, methodical; she repeated questions over the span of an hour or so, as if to trip the professor up, and I think it's clear what she's doing: she's trying to build a case, possibly to impugn the credibility in terms of the emotional impact that this experience had on professor Ford. Questioning her at length about her travels, her fear of flying, and yet her resume says, I think, that she's been scuba diving in several different countries far away; she traveled to the East Coast. Over and over slowly building that up as well as going over the same facts, I think to create, again, that argument for the future that she‘s been set up. It's just, it's an insidious process, and I think it shows the hypocrisy of the Republicans saying they're trying to do this out of sensitivity… I don't buy that."

The questions, Verheyden-Hilliard said, aimed to "go through [Ford's] underwear drawer… to humiliate her; it's to catch her." Verheyden-Hilliard noted that the wording Mitchell chose was recognizable to her as a lawyer: "They were the very same phrases that we all do when we're conducting deposition. Her opening comments are the type of comments you prepare in advance of a record." Verheyden-Hilliard recalled from her own experience that "this is exactly what attorneys on the other side do, that are defending racists, sexists, corporations, against people that have been subjected to this, which is trying to peel apart everything they say and set them up to find the most minor, immaterial inconsistency or alterations, so that then they can say, ‘Aha, this means you're a liar.'"

"There's nothing of substance that has come out of anything that Rachel Mitchell asked, that appears to matter."

Boghosian noted that Ford's attention to detail helped to defuse Mitchell's cross-examination, as Ford was able to provide accurate information about "the pettiest details" the prosecutor focused on, including rewording her statements to be more precise or more easily understandable when questions were repeated.

Verheyden-Hilliard said that the attitudes shown by both parties about Kavanaugh and Ford reflect those shown by them at past sexual assault proceedings, recalling how Anita Hill came forward during Clarence Thomas' confirmation hearings to become a Supreme Court justice in 1991, but Democratic Senator Joe Biden blocked the ability of other women to testify on Hill's behalf and corroborate her story.

One is also reminded of Juanita Broaddrick, who in 1999 accused then-President Bill Clinton, a Democrat, of having raped her in 1978. Outside the Senate building in Washington, DC, on Thursday, Broaddrick told the media that Democratic Senators Dianne Feinstein and Chuck Schumer showed "the biggest double standard I've ever seen" by believing Ford's story but not hers, when as she said, "I had the who, what, when, where and how." Broaddrick also implied that Ford had less evidence than she had, Sputnik reported.

"We really haven't made that much progress since Anita Hill," Boghosian said. "There's a lack of honesty in our judicial system; the rule of law means nothing to those in power. It seems everyone is looking out for their own individual interests."

"This is something we have to take into our own hands to change," Boghosian said. "Every time a woman steps forward with the courage to share her story, we inch forward, but incrementally. You would think that the #MeToo movement and the events of the last year would hold our leaders more accountable for being responsive to these really treacherous allegations."

"Historically, if you were subject to harassment, abuse, assault, and you wanted to speak out about it, so often we're all trained to know that we're immediately going to be cross-examined, even by our friends and our family, that the first questions are ‘What did you do to deserve it,' ‘What did you do wrong,' ‘How were you complicit in criminal or awful acts against you,'" Verheyden-Hilliard said. "That's how women have thought. And women so often don't even tell their close friend about things that they've endured and things that they've gone though. That's what's changed."

"Once women speak out, once anyone who is suffering under oppression begins to speak out, and hears all of these other voices around them also speaking out, that is the most empowering, powerful act that can happen in changing consciousness and in changing society. And that's what happening with women standing up against powerful men… who are either powerful in a larger way in our society or simply powerful in their own lives, in saying, ‘You've done this, I'm gonna talk publicly about it, I'm not gonna let you get away with, I'm not gonna be silent.' That changes everything."

000000
Popular comments
She half covered her face with her hair and eyewear also clearly concealing her face. She said "I don't remember" more than anything else. 2 Men have come forward claiming to be the possible aggressors. I'm not attacking her personally. Her story was a hack job funded and guided by the dems. If anyone watched her address and looked closely at her and what she said and how she said it, I wouldn't give her performance any credit.
Conspiracy
28 September 2018, 11:14 GMT
000000
Newsfeed
0
New firstOld first
loader
LIVE
Заголовок открываемого материала
Access to the chat has been blocked for violating the rules . You will be able to participate again through:∞. If you do not agree with the blocking, please use the feedback form
The discussion is closed. You can participate in the discussion within 24 hours after the publication of the article.
To participate in the discussion
log in or register
loader
Chats
Заголовок открываемого материала
Worldwide
InternationalEnglishEnglishMundoEspañolSpanish
Europe
DeutschlandDeutschGermanFranceFrançaisFrenchΕλλάδαΕλληνικάGreekItaliaItalianoItalianČeská republikaČeštinaCzechPolskaPolskiPolishСрбиjаСрпскиSerbianLatvijaLatviešuLatvianLietuvaLietuviųLithuanianMoldovaMoldoveneascăMoldavianБеларусьБеларускiBelarusian
Transcaucasia
ԱրմենիաՀայերենArmenianАҧсныАҧсышәалаAbkhazХуссар ИрыстонИронауОssetianსაქართველოქართულიGeorgianAzərbaycanАzərbaycancaAzerbaijani
Middle East
Sputnik عربيArabicArabicTürkiyeTürkçeTurkishSputnik ایرانPersianPersianSputnik افغانستانDariDari
Central Asia
ҚазақстанҚазақ тіліKazakhКыргызстанКыргызчаKyrgyzOʻzbekistonЎзбекчаUzbekТоҷикистонТоҷикӣTajik
East & Southeast Asia
Việt NamTiếng ViệtVietnamese日本日本語Japanese俄罗斯卫星通讯社中文（简体）Chinese (simplified)俄罗斯卫星通讯社中文（繁体）Chinese (traditional)
South America
BrasilPortuguêsPortuguese
NewsfeedBreaking
12:48 GMTRoyal Dutch Shell Reports Shortage of Some Fuel Grades in UK Sites
12:42 GMTRussia's Gazprom, Hungary Sign 15-Year Contract for Gas Supplies
12:39 GMTPentagon Urged to Commit to 'Consistent’ Probing of 'Unidentified Aerial Phenomena'
12:26 GMTMacron Files Legal Complaint After Being Photographed in Swimsuit - Report
12:10 GMT'Odd Bunch': Man Utd Doesn't 'Play Well Enough as Team' to Win Premier League, Pundit Warns
12:03 GMTProbe Into Beirut Port Blast Suspended as Lawsuit Filed Against Judge, Report Says
11:50 GMTAustralia's New South Wales to Gradually Ease COVID-19 Restrictions Starting October
11:39 GMTUnions Boss: Europe's Drivers Don't Want to Return to UK & Help Country 'Get out of the Sh*t'
11:37 GMTOver 60% of Germans Want Laschet's Resignation as CDU Leader After Party's Defeat, Poll Shows
11:31 GMTAngelina Jolie, The Weeknd Fuel Dating Rumours After Being Seen Going Out in Los Angeles
11:14 GMTAfghanistan's Banking System Might Collapse 'Any Day Now' Over Lack of Cash, Watchdog Warns
11:03 GMTUS Navy Says Bahrain Has Agreed to Join Its New Drone and AI-Powered Persian Gulf Task Force
10:58 GMTCOVID Lockdowns Have Led to Giant Rats Emerging From UK Toilets, Expert Says
10:58 GMTWATCH 'Egg' Get Thrown at French President Macron
10:48 GMTWho Are the Candidates to Take Over as German Chancellor From Angela Merkel?
10:33 GMTDutch Acting Prime Minister Under Extra Protection Over Attack, Abduction Threat, Reports Say
10:27 GMTThe New Yorker Accused of Platforming Terrorist After Podcast Guest Calls for Civil Disobedience
09:58 GMTStrong EU Will Be Germany's Key Policy Task, SPD's Olaf Scholz Says
09:55 GMTUK Climate Protesters Defy Court Order to Block Highway Around London - Video
09:31 GMTCDU/CSU Candidate Laschet Reportedly Ready to Admit Defeat in Bundestag Elections