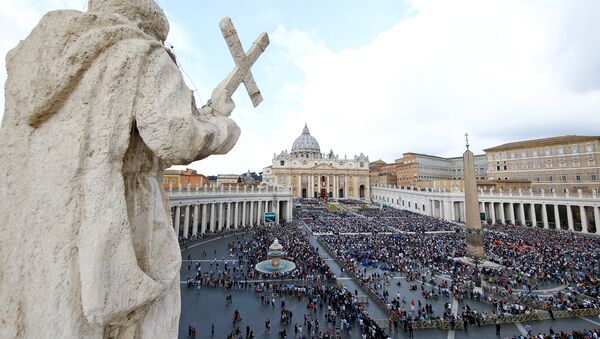 © REUTERS / Stefano Rellandini
Subscribe
International
India
Africa
KIEV (Sputnik) - The Vatican corrected the claim of the Ukrainian Foreign Ministry that the Holy See respected Kiev's decision to establish an independent Orthodox Church, the Apostolic Nunciature in Ukraine said, stressing that it was an internal matter of the Orthodox Church.

"In order to partially correct the news given by official Government sources with regard to the meeting that took place yesterday… the Apostolic Nunciature in Ukraine wishes to once again state the position of the Holy See in the question of the creation of one Local Ukrainian Orthodox Church, namely that this is an internal question of the Orthodox Church, on which the Holy See never did and has no intention whatsoever of expressing any evaluation, in any venue," the statement of Vatican issued on Wednesday read.

The statement was made amid Ukrainian President Petro Poroshenko's efforts aimed at establishing a single local autocephalous church in the country based on the non-canonical Ukrainian Orthodox churches.