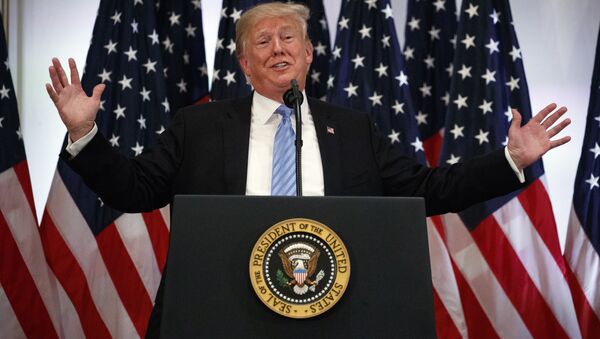 MOSCOW (Sputnik) - US President Donald Trump's stance on toughening sanctions with Iran seeks to create an illusion that the United States still "rules the world" and hide the weakening of Washington's role on the international arena, Jose Ervard, a member of the National Assembly of France, told Sputnik Thursday.

"When we are in a difficult situation, we are trying to show off muscles to seem strong. The decision Trump has taken on Iran especially concerns the US and its hegemony at the international level being questioned nearly everywhere: from the military, from a commercial point of view. Trump makes a point saying 'America first,' but only because the US is no more an uncontested leader of the Western world. So it is obliged to use the strong language to create an illusion it still rules the world," Ervard said.

READ MORE: Trump at the UN: The Changing Place of the U.S. in Global Politics

Trump Lawyer Giuliani: US Sanctions May Lead to ‘Successful Revolution’ in Iran
The National Rally party member added that Trump is using the Iranian nuclear program as a pretext to jeopardize Iran’s economy since Tehran’s policy in the region does not go in line with US interests, but stressed that China was still a ready market for Iranian oil, thus rendering US sanctions targeting the Iranian energy sector ineffective.

US sanctions on Iran additionally serve as a tool to pressure the European Union by hitting EU companies such as Total, PSA and Renault, who now have to leave their business in Iran unless they want to incur losses in their business with the United States, according to the French lawmaker.

The comment was made after on Wednesday, during a UN Security Council meeting, Trump said the United States would pursue new restrictions against Iran after reimposing all nuclear-related sanctions that would be even more hard-hitting than any previous ones.

Previously, Trump decided to withdraw the United States from the Iran nuclear deal and has announced a re-imposition of US sanctions on Tehran in two rounds, the second of which will be introduced in November and will target Iran's energy sector and oil exports. EU states party to the deal vowed to preserve the accord and states still in the P5+1 deal recently agreed to set up a transaction vehicle allowing EU companies to do business with Iran while not being sanctioned by the United States.

The views and opinions expressed by Jose Ervard are those of the speaker and do not necessarily reflect those of Sputnik.