'Emmanuel Macron’s Speech Was a Blast of Stale Air' – Commentator 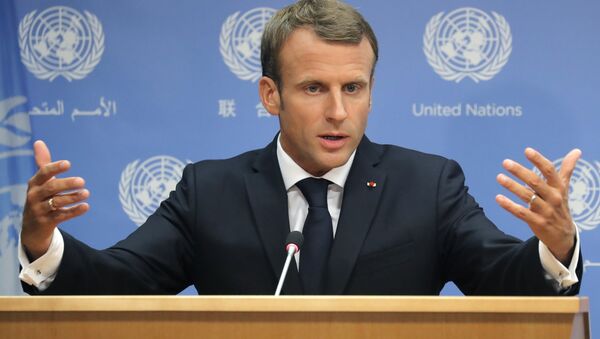 © REUTERS / Caitlin Ochs
Subscribe
US President Donald Trump rejected globalism, lashed out at enemies and rallied against multilateralism in his speech at the United Nations General Assembly on Tuesday. In a statement which met with guffaws from the world's leaders, he said that his administration accomplished more than almost any other US administration.

Srdja Trifkovic: First of all, as far as social cohesion goes, America is a more fractured and a more divided society now than ever in its history. We can see that the liberal left has absolutely no standards when it comes to destroying their opponents, the example of Judge Brett Kavanaugh to wit. On the other hand, its economic success is, undoubtedly, impressive but it is open to debate, to what extent this is the result of policies set in motion by the previous administration or by global and domestic trends which were not particularly influenced by Trump's decisions, or whether his frankly decisive stand on tax reduction programs and increasing tariffs against foreign imports has resulted in a new wave of confidence in the domestic market. I think that in terms of a neutral and objective assessment, it's far too early to tell. I don't think that the parallel with the greatest achievements in the US history stands when it comes to the rates of growth: I think that America under Eisenhower in the 1950s did well, even better than today. As far as America's global standing is concerned, let's not forget that its share of the global economy in 1960 was around 40% while today it's only about half of that.

Sputnik: Trump's speech was followed by that of French President Emmanuel Macron. Many would say that was an absolute opposite. Macron condemned nationalism, pledged to promote multilateralism and supported globalism; what are your thoughts on how pertinent his speech was in the format of the UNGA?

Srdja Trifkovic: Emmanuel Macron's speech was a blast of stale air, not fresh air. Macron stands for all the failed platitudes and certainties of the old multilateralist globalist order of the 1990s and 2000s, and he certainly stands for an ever-tighter (European) Union, mandated and dictated from Brussels. We already see resistance to this approach in the form of Brexit west of the (English) Channel, and in the Visegrad Four: Poland, the Czech Republic, Slovakia and Hungary in the east, and of course, the rebellion in Italy. Macron actually wants Brussels to have ever-tighter control, and he also wants to eradicate those really beautiful and essential national differences ultimately embodied in national sovereignties that give Europe strength and diversity. We see that his own attempts to integrate unassimilable and unassimilated millions of Muslims into the French society have failed; why should we believe him that it would work on a pan-global or pan-European basis?

Sputnik: And yet, President Trump's speech was met with laughter while Macron's speech drew applause from the audience.

Srdja Trifkovic: Because the cognoscenti of the UN General Assembly do belong to the post-modern elite class of post-nationalists who have more in common with each other than with members of their own nations. I think that it would be extremely worrying if his speech was greeted with applause and Macron's with derision, because that means that the global elite was shifting allegiances and shifting paradigms of its value system. It will do its own thing; it has been surpassed by developments and I'm in particular hopeful that in Europe Macron's attitude to solution of things like the migrant invasion, identity and sovereignty is a thing of the past. Brussels has been defeated, thank God, and Macron is the voice if the defeated.

The views and opinions expressed by the speaker do not necessarily reflect those of Sputnik.
000000
Popular comments
Asinus Asinum fricat.