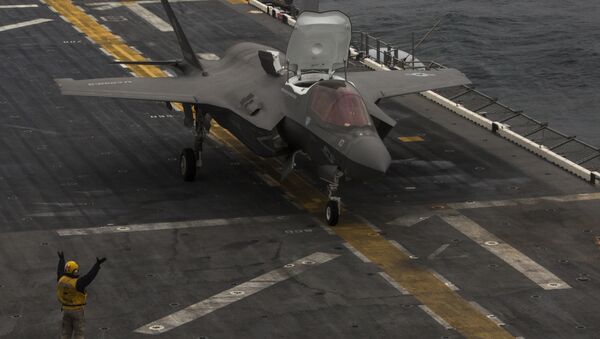 According to CENTCOM, the F-35B Lightning II Joint Strike Fighter operated by the US Marine Corps has carried out its first ever combat air operations against Taliban* targets in Afghanistan.

Earlier in the day, CNN reported citing three US defense officials all speaking on condition of anonymity as its sources that the F-35B Lightning II Joint Strike Fighter operated by the US Marine Corps has carried out its first ever combat air operations against Taliban targets in Afghanistan.

"The strike took place in Afghanistan against a fixed Taliban target," the US media reported. "The aircraft involved was the US Marine Corps' variant of the aircraft flying from the USS Essex amphibious assault ship."

'Su-35 Can See F-35 All Right': Military Expert Says US Jet 'Too Complex'
The F-35 is regularly described as the most expensive aircraft and military program in history with projections of its costs running to $1.5 trillion over a 30-year period. The program continues to be plagued by delays, cost overruns and failures of fundamental systems.

The F-35B is the world’s first supersonic short and vertical takeoff and landing (STOVL) aircraft and is operated by the US Marine Corps. It is the first of the three F-35 variants that have been cleared as combat-ready.

The F-35B attacks on the Taliban come amid a report from the United Nations Assistance Mission to Afghanistan that found civilian casualties from pro-government airstrikes surged in 2018. The mission reported a 52 percent increase in civilian casualties from air assaults, with 149 civilians dead and 204 injured, during the first half of 2018 as compared with the same time frame a year prior.