US Jet Snaps in Half as It Crashes, Killing Two (PHOTOS, VIDEO) 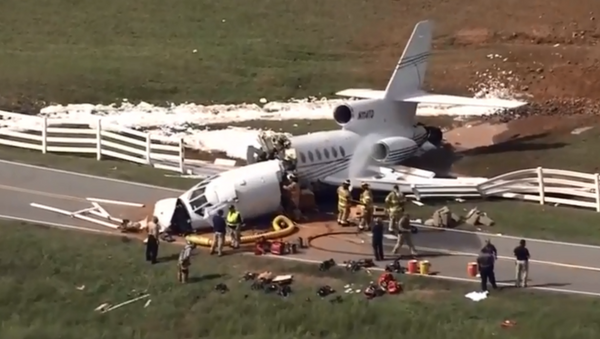 © Screenshot/ 11Alive
Subscribe
A personal Falcon 50 plane was split in two after it crashed in South Carolina, photographs and videos from the scene show.

The pilot and co-pilot of the aircraft were both killed, while the pilot's body remains in the cockpit. Authorities told reporters by the scene that four people were on board. Of the deceased, one was pronounced dead at the scene and the other was at the hospital. "It looked like blunt force injuries," Parks Evans, the county coroner, said.

Witnesses say that a husband and wife were passengers on the plane. The wife was reportedly injured critically and carried away by first responders while the husband was able to walk away with help.

According to Fox Carolina reporter Cody Alcorn, the jet overshot the runway. It's reportedly a common aircraft for business travel.

Jet fuel reportedly spewed from the engine, still at full throttle, after the crash. "A fair amount of fuel made it into the ditch," Police Chief Ken Miller said. "The fire department does have it contained. Hazmat also has it contained." Authorities are expected to continue working on the cleanup for the next few days.

Miller said that "at this point, we're no longer in a rescue capacity or anything like that," adding that they will work in support of the Federal Aviation Administration, who are en route. He urged nearby residents to avoid swimming in the area and smoking so as to not ignite any fuel that could be lingering.

“In maybe 20 years, we might have had three to four minor incidents and this is probably the most serious,” said the director of the local airport, Joe Frasher. “We have aircraft this large and larger routinely land at this ramp. It’s very rare that this has happened.”

The airport and roads nearby have been closed to traffic. The National Transportation Safety Board announced on Twitter that they are investigating the crash.

000000
Popular comments
How is it possible that an engine is still running when the aircraft has crashed? Surely they have sensors that detect this and shut them down? Most modern cars do.
James9999
28 September 2018, 11:47 GMT
000000
Newsfeed
0
New firstOld first
loader
LIVE
Заголовок открываемого материала
Access to the chat has been blocked for violating the rules . You will be able to participate again through:∞. If you do not agree with the blocking, please use the feedback form
The discussion is closed. You can participate in the discussion within 24 hours after the publication of the article.
To participate in the discussion
log in or register
loader
Chats
Заголовок открываемого материала
Worldwide
InternationalEnglishEnglishMundoEspañolSpanish
Europe
DeutschlandDeutschGermanFranceFrançaisFrenchΕλλάδαΕλληνικάGreekItaliaItalianoItalianČeská republikaČeštinaCzechPolskaPolskiPolishСрбиjаСрпскиSerbianLatvijaLatviešuLatvianLietuvaLietuviųLithuanianMoldovaMoldoveneascăMoldavianБеларусьБеларускiBelarusian
Transcaucasia
ԱրմենիաՀայերենArmenianАҧсныАҧсышәалаAbkhazХуссар ИрыстонИронауОssetianსაქართველოქართულიGeorgianAzərbaycanАzərbaycancaAzerbaijani
Middle East
Sputnik عربيArabicArabicTürkiyeTürkçeTurkishSputnik ایرانPersianPersianSputnik افغانستانDariDari
Central Asia
ҚазақстанҚазақ тіліKazakhКыргызстанКыргызчаKyrgyzOʻzbekistonЎзбекчаUzbekТоҷикистонТоҷикӣTajik
East & Southeast Asia
Việt NamTiếng ViệtVietnamese日本日本語Japanese俄罗斯卫星通讯社中文（简体）Chinese (simplified)俄罗斯卫星通讯社中文（繁体）Chinese (traditional)
South America
BrasilPortuguêsPortuguese
NewsfeedBreaking
22:38 GMTAlternative for Germany to Continue Supporting Nord Stream 2 After Election - Co-Chairman
22:01 GMTMilitants in Aleppo Tried to Force Way From Turkish-Controlled Area - Russian Military
21:48 GMTGermans See No Use to Vote for CDU Without Merkel at Helm - Afd Politician
21:19 GMTGerman Conservatives Suffer Catastrophic Defeat in General Election – Senior Official
21:00 GMTGermany's FDP Leader Hints at Coalition Talks With Greens
20:45 GMTMacron Files Complaint Against Paparazzi for Invasion of Privacy - Reports
20:16 GMTTwitter Removes Blue Verified Badge From Accounts of Several Afghan Ministries - Reports
20:00 GMTLaschet, Scholz Want Coalition Talks to End by Christmas
19:41 GMTCIA Was Ready to Start Firefight in London to Prevent Russia From Busting Out Assange, Media Claims
19:20 GMTSuicide Pact? Top Labour Remainer Says Party Should Campaign to Rejoin EU
18:58 GMTVideo: Miss France 2019 Confronted by 'Teenage Gang' That Threw Stones at Her in Paris
18:47 GMTFree For All! Enraged Moped Drivers Fight in London Amid Lack of Fuel - Video
18:39 GMTPSG's Kylian Mbappe Caught on Camera 'Lamenting Neymar Would Not Give Him Passes'
18:35 GMTPowerful 5.7-Magnitude Earthquake Hits Philippines' Largest Island Luzon
18:00 GMTInfrastructure Plan: Pelosi Says She 'Never' Brings a Bill to Floor 'That Doesn't Have the Votes'
17:43 GMTUsyk vs. Fury? Gypsy King's Twitter Like Leaves Fans Buzzing About Possible Heavyweight Clash
16:50 GMTLabour Leader Demands Visas For 100K Foreign Lorry Drivers Amid Global Shortage
16:33 GMTLabour Staff Cuts That Prompted Strike Ballot Due to £2m-a-Year Legal Costs
16:23 GMTDHS Chief Reveals Up to 12,000 Haitians Who Crossed Southern Border Were Released Into US
16:21 GMTTurkey Wants US Military to Leave Syria, Iraq After Afghanistan Withdrawal, Erdogan Says