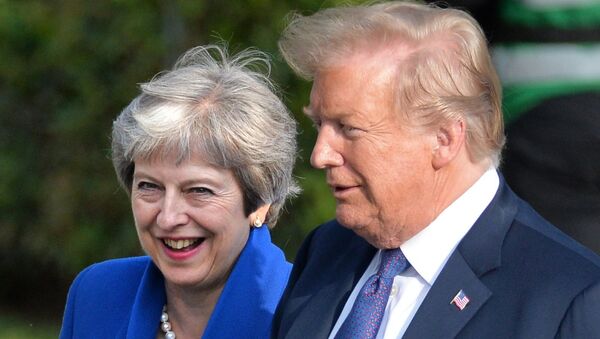 © Sputnik / Aleksei Vitvitsky
/
Go to the photo bank
Subscribe
Prime Minister Theresa May will discuss Brexit and a bilateral trade deal with US President Donald Trump on the sidelines of the United Nations General Assembly in New York, amid increasing uncertainty over Britain's EU exit plans.

A senior UK official said they will be discussing a post-Brexit trade deal amongst a range of subjects also including chemical weapons and foreign affairs.

When they meet they often discuss Brexit negotiations and they both have a strong commitment to securing a strong UK-US free trade agreement once we've left the European Union. A trade deal with the United States is seen as an important way to help offset the economic impact of leaving the EU in March next year. May's government has long touted the freedom to strike such deals independently of the EU as the main economic benefit of Brexit.

Any supportive comments from Trump could boost May's struggle to win over critics who say her exit plan is unworkable, and soothe financial markets which expect severe disruption if she is unable to get a Brexit deal.

Sputnik spoke to Professor Inderjeet Parmar from the Department of International Politics University of London city about the meetings and the latest from the UN General Assembly.

Sputnik: How have you been viewing the UN General Assembly so far?

Inderjeet Parmar: The big story is what the US administration has been doing there and Trump's speech at the General Assembly, very aggressive instead of attacking North Korea as he was last year, he's attacking Iran as a destabilizing threat and the cause of death and chaos and so on. He's justifying the violation of the nuclear agreement and threatening all kinds of sanctions to strangle and starve Iran. Then there is the fact the trade war with China seems to be ramping up and he's continuing on that kind of line. His America first is really strongly developed one and a half years in. the world situation looks quite serious and confrontational.

Sputnik: After a turbulent few weeks can there be any positives from Ms. May's meeting with President Trump?

Inderjeet Parmar: Well clearly Theresa May and the Brexiteers in the Conservative party will look to that meeting offering some kind of hope given an exit from Europe that there will be a really good trade deal with the United States which will then lead to good economic growth and so on. They'll be looking to try and achieve this and try to declare that the future can be rosy and this is our big alternative for a global Britain and a free trade agreement with the United States.

Sputnik: What's likely to be discussed in that meeting at the UN General Assembly?

Inderjeet Parmar:  There is the continuing issue around NATO, there is a rhetoric around the Trump administration around being very critical of NATO and try9ing to get individual states in Europe to spend more, that's been broadly successful. I'm sure they'll be discussing a continuation of that trend. NATO has geared up on this new concept of 30 x4 so they can deploy very large numbers of air force nav6y and tanks and so on within 30 days' notice directed towards the east and Russia and so on.  I think they'll talk about that and the whole issue of Syria will come up, the Iran agreement will come up as well and those both being related in some way to Russia. So I suspect there will be a few bug issues.

The views and opinions expressed by Inderjeet Parmar are those of the speaker and do not necessarily reflect those of Sputnik.