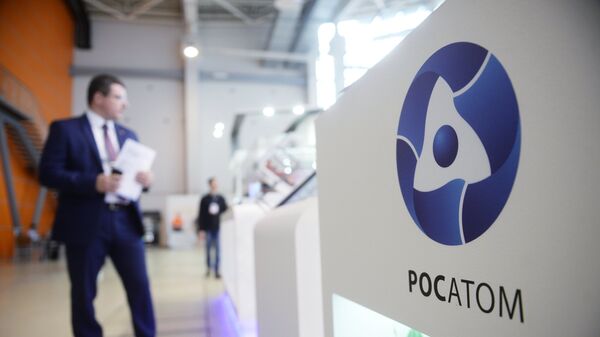 Digitization has become the central theme of the fifth international NDExpo forum, which is taking place in Moscow under the aegis of Rosatom on September 25-26.

"We have a ready-made solution that was not only developed, but also tested. Rosatom’s Smart City platform, in its basic form, which includes cloud services of data processing which is stored on its own data processing centers, as well as integrates projects of subsidiary companies of the state corporation, makes it possible to effectively manage the urban infrastructure and provides new opportunities," Ksenia Sukhotina, the director general of Rosatom's subsidiary responsible for in the Smart City direction, told Sputnik. said on the sidelines of NDExpo-2018.

According to her, businesses, authorities and the general public would benefit from the use of the platform.

"These technologies are already operating in the town of Sarov in the Nizhny Novgorod Region [in Russia]. This decision was implemented in close cooperation with the local administration and focuses on real urban problems. Thus, for example, city residents can submit a request online if they have a problem in the housing and utility sector, and track the solution and status [of the request] in real time. The city administration reacts to the requests of residents more quickly, without going through a number of bureaucratic procedures," Sukhotina said.

She added that Rosatom’s Smart City could be integrated at all levels of a municipality’s development.

"An essential feature of our solution is that we integrate all city services on one platform. We are ready to cooperate with the administrations of any cities and regions, adapting our solution to their specific needs. But, the city should clearly define where it is moving and what processes are needed to be digitized so that the routine is gone, people are free and so the city itself feels the economic effect," the Rosatom official told Sputnik, adding that their task, besides convenience and comfort, was to be useful in economic terms, namely by cutting cost and reducing resource consumption.

According to Sukhotina, not all effects from the introduction of Smart City could be monetized.

"For example, it is difficult to calculate social benefits, such as convenience and comfort of residents. We primarily rely on maintaining and increasing human capital," she explained, saying that the main thing for the corporation was that people in the regions where the state corporation was present could live and work in comfort.

"However, indirect effects can be reflected in monetary terms over the long term — from 5 to 15 years. The logic is simple: if it is comfortable and safe to live in the city, people, primarily highly qualified specialists for whom there is a great demand in Rosatom’s enterprises, come there with pleasure. As a result, technological activities are developing, the competitiveness of local products and services is increasing, the profitability of local companies and tax revenue are increasing, the city’s budget is being boosted," Sukhotina said.

Sukhotina explained why Rosatom was engaged in the subject of urban digitalizing.

"Firstly, we initially worked with our ‘nuclear’ cities, that is why we understand how important the human capital is. These are our cities, for which we are ultimately responsible, these are our people and their families. So the residents of Snezhinsk, Dimitrovgrad, Sarov, Sosnovy Bor would soon have a very clear and equally high level of service," Sukhotina said.

Secondly, there were many decisions in the nuclear industry that could be integrated into the Smart City platform, Sukhotina added. According to her, this, in particular, was the development of the “digital” construction of “Multi-D City.”

One of Smart City’s key features is that it is a completely domestic product.

"We are perfectly aware of what security means, including information security, resistance to cyber attacks, and we approach these issues very professionally," she said.

Sukhotina told Sputnik that it was important that the platform was forthcoming in integrating with all the developments that had already been carried out in the city, or those services that the city wanted to further develop.

"For example, now we are negotiating with the Federal Medical and Biological Agency on the exchange of data related to medicine. And, of course, we cannot take over everything that may concern a particular service. But, on the other hand, we ensure a healthy balance. I would put it this way: our solution involves the safe use of open data with reliable partners," she added.

Where Money for This Project Comes From

Sukhotina also told Sputnik what the financial scheme of Rosatom’s Smart City would be.

"It is planned to implement the project by attracting debt financing. So, this year in May, we signed agreements on the strategic long-term partnership with Gazprombank, Sberbank and Sovcombank in the field of implementation of joint investment projects, including concession projects in the housing and utility sector, within the framework of developing the Smart City direction," she said.

Subsidies from regions and national program funds were other possible sources of funding, Sukhotina continued.

"And we are working at the federal level, lobbying the program for investing in urban upgrading, helping them to engage in various national projects," she explained.

She noted that the platform could be implemented immediately, integrating information from various systems that already exist in the city.

"This does not require large investments. The good thing in our system is that we already know what information we can take from the city’s infrastructure and who to give it to, how to establish an exchange of information," Sukhotina added.

Science & Tech
Russia, China Discuss Joint Development of Overseas NPP Projects - Rosatom
Sukhotina told Sputnik how it was being planned to replicate Smart City by introducing this platform not only in the cities where Rosatom’s enterprises are located, but also in other Russian municipalities and abroad.

"We start with ‘nuclear’ cities, but we are also discussing the possibility of using our developments with other cities, and we will be very happy if it will be useful," she said.

Sukhotina gave some examples of how this platform has been introduced.

"Rosatom signed an agreement this summer with the Sverdlovsk Region to cooperate on the Smart Region project, and now we are actively interacting with representatives of the regional executive authorities, offering our solutions that could potentially form the basis for building a digitalizing platform for cities and settlements of the Sverdlovsk Region," she added.

Another example was about cooperation with the city of Derbent, located in the Russian Republic of Dagestan.

"We proposed to the government of the Republic of Dagestan to make a ‘smart’ platform in the ancient city of Derbent. Now, we are discussing how to make it a modern, advanced tourism center. And we are already ready to develop all digital services, move toward convenience, security and comfort for tourists. We also offer Smart City in the foreign market, for example, our colleagues from Serbia were interested in our product," Sukhotina said.