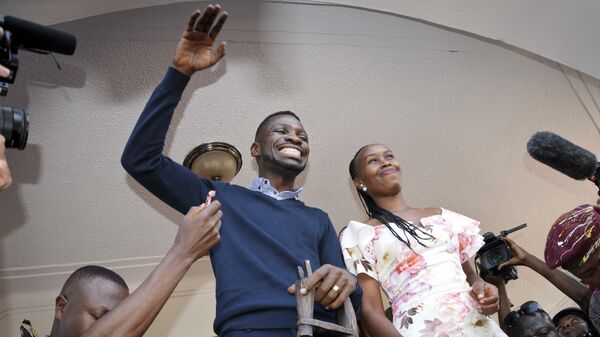 A rapper and pop star turned opposition politician has returned to Uganda after being badly beaten by the police. Sputnik asks Professor Nic Cheeseman if it could be the beginning of the end for the country's President Yoweri Museveni.

Bobi Wine, denied access to the government-run television network, gave a press conference on Saturday, September 22, and uploaded it to YouTube.

Last month the 36-year-old singer, who was born Robert Kyagulanyi Ssentamu, was beaten and tortured by police earlier and flew to the United States for treatment of his injuries. His driver was shot dead.

Many people assumed he would be going into exile but he returned to Uganda last week and gave a stirring speech, promising to oust Museveni and his ageing cronies.

"It looks like the government is determined to keep us slaves in our own country but I have come to continue exactly where I stopped. I am going to fight on…I cannot be a refugee," he said. 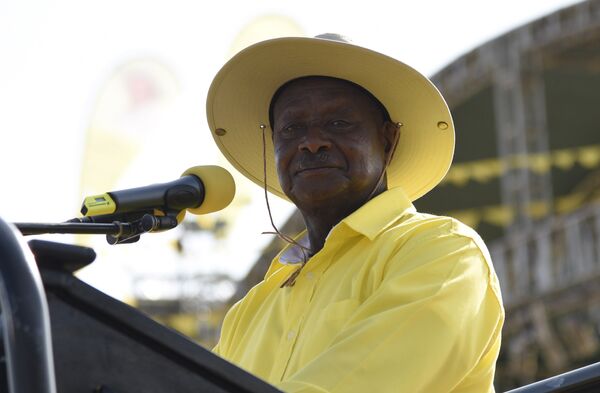 Bobi Wine was only four years old when Museveni came to power and he is counting on support from Uganda's youth, which represent a large proportion of the country's population.

Uganda has one of the youngest and most rapidly growing populations in the world.

Museveni came to power in 1986 when his rebel army, the National Resistance Movement, ousted a corrupt government a year after his arch-enemy Milton Obote had been toppled in a military coup.

But Nic Cheeseman, Professor of Democracy at the University of Birmingham and founder of Democracy In Africa, said power had changed him.

Africa is urbanising fast — and this is fundamentally changing the continent's politics, writes @fromagehomme. https://t.co/hQOjYngAem pic.twitter.com/wYXgtH8FDW

"His early image as a reformer and new breed of leader has now well and truly been destroyed," Prof. Cheeseman told Sputnik.

"Museveni remains in power for a number of reasons — he believes he needs to do so in order to secure his legacy, he and his allies have too many vested interests in remaining in power, there is no obvious replacement, and the NRM regime is strong enough to divide and rule the opposition," Prof. Cheeseman told Sputnik.

"His determination to be a ‘president for life' does mean that the chances of him ending up as a Robert Mugabe figure are increasing all the time," Prof. Cheeseman told Sputnik. 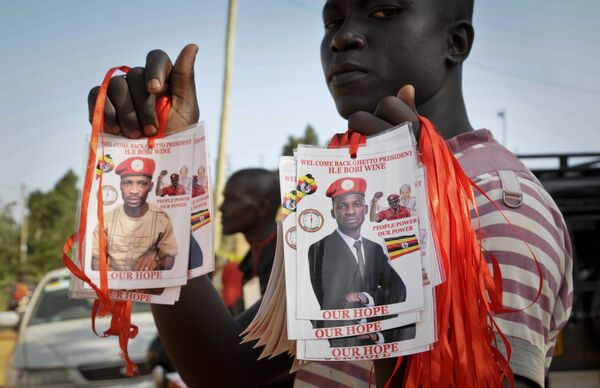 A supporter holds up images of Bobi Wine, a popular Ugandan singer who is now a rising opposition politician
© AP Photo

Museveni was the darling of the West for years as he brought back peace, stability and free market economics to a company that under Obote and his predecessor Idi Amin had known only violence, civil war and flirtations with socialism.

For many years — right up until 2005 — northern Uganda was terrorized by the crazed fanatics of Joseph Kony's Lord's Resistance Army and was also preoccupied with the conflicts in neighbouring Rwanda and the Democratic Republic of Congo.

But in recent years there has been a growing feeling that Museveni, who turned 74 last week, has overstayed his welcome.

In 2016 he was re-elected president but the defeated candidate, Kezza Besigye, cried foul and claimed the poll was rigged.

"We are fed up of those who oppress our lives. And everything that takes away our rights. Uganda seems to be moving backwards….Well, we know you fought a bush war but imagine a child who was unborn when you came has also long become a parent. Someone help us to tell this to Mzee. I also beg his fellow elders to tell him," sang Bobi Wine.

"I don't feel safe at all…My family lives in fear," the singer said on Monday, September 24.

Later, I visited our comrades who were brutalized in Arua & are currently receiving treatment at Lubaga & Mengo hospitals. I was glad to note that despite their physical pain, comrades Atiku Shaban, Asara Night & Sauda Madaada are still devoted to the struggle for our freedom. pic.twitter.com/6jp7gYx3EE

​He faces trial for treason over an incident last month in which the president's convoy was stoned in the northern town of Arua.

Behind the scenes US and European diplomats are thought to be urging Museveni to prepare a timetable for leaving or end up going the same way as Zimbabwe's President Robert Mugabe, who was ousted by the country's army last year.

Like Mugabe, Museveni's powerbase is in the countryside and his opponents draw much of their support from younger, urban voters.