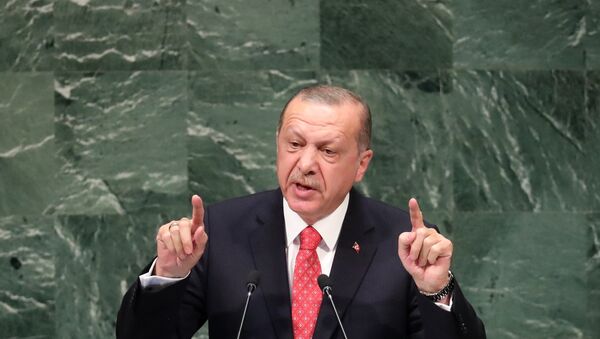 Turkish-US relations have reached a new low in recent weeks amid back and forth sanctions against officials, a tariff war sparked by US restrictions on Turkish steel and aluminum and a drop in the value of the lira, which President Recep Tayyip Erdogan has pinned on a "series of negative statements" by Washington.

"None of us can remain silent to the arbitrary cancellation of commercial agreements, the spreading prevalence of protectionism and the use of economic sanctions as weapons," Erdogan said, speaking before the United Nations General Assembly on Tuesday.

"We are in favor of solving our problems through conducting a constructive dialogue on equal terms," Erdogan added.

In a veiled attack presumably aimed at Washington, Erdogan pointed to attempts by some countries to "create chaos" in the world.

"It is very easy to create chaos but it's difficult to reestablish order, and today some countries are persistently trying to create chaos," the Turkish president lamented.

Turkish Reporter Denies Erdogan Left UNGA Hall Because of Trump's Speech
Referencing Turkish-US tensions over Washington's military support for Syria's Kurdish militia, whom Ankara says are affiliated with Kurdish separatists in Turkey, Erdogan warned the US of the consequences of this type of policy. "Those who equip terrorists with tens of thousands of trucks and thousands of cargo planes loaded with arms for the sake of their tactical interests will most definitely feel sorrow in the future," he said.

Erdogan also directed his criticism toward the UN itself, saying the body risks becoming an organization with a "reputation for failure" and that it had "moved away from the capacity to meet the expectations of humanity through peace and welfare." The UN, he said, needs to be restructured to better accommodate the interests of its non-Security Council members.

President Erdogan and President Donald Trump reportedly held a brief "on the go" meeting on the sidelines of Tuesday's General Assembly meeting, Turkey's NTV broadcaster reported. Earlier, Turkish media denied that Erdogan had demonstrably left the room of the General Assembly when President Trump began to speak, saying his leaving was connected to his going into another room to prepare for his own speech.

OECD Revises Turkey's Real GDP Growth Forecast After US Tariffs - Report
Relations between Ankara and Washington began a steady decline in the aftermath of the July 2016 coup attempt. The US has persistently refused to extradite Islamic cleric Fethullah Gulen, who resides in Pennsylvania and whom Turkey holds responsible for the failed coup. Ties have been further strained by Turkey's detention of US pastor Andrew Brunson, whom Ankara accuses of having ties to Gulen. The US has slapped sanctions on several Turkish officials over Brunson's detention, with Ankara responding in kind. Relations have also been affected by Turkey's purchase of Russia's S-400 air defense system, which Washington has intensely criticized. Diverging interests in Syria and President Trump's protectionist economic and trade policy have also affected ties between the NATO allies.