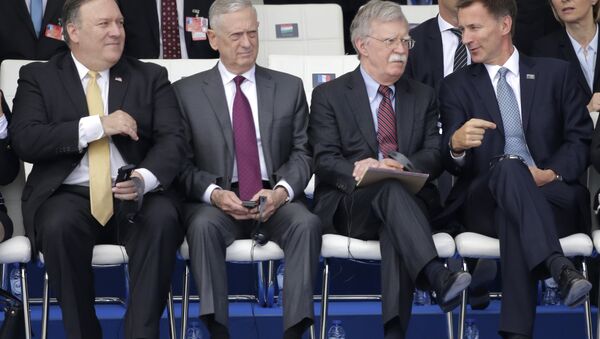 © AP Photo / Markus Schreiber
Subscribe
International
India
Africa
White House National Security Adviser John Bolton told the media Monday that the US will continue to have a presence in Syria until Iran no longer does. Later in the day, Defense Secretary James Mattis contradicted Bolton’s stated mission - although he claimed otherwise - when talking to reporters at the Pentagon.

"We're not going to leave [Syria] as long as Iranian troops are outside Iranian borders, and that includes Iranian proxies and militias," Bolton told the Associated Press at the United Nations General Assembly, presumably referring to the Islamic Revolutionary Guard Corps presence in Syria and Hezbollah.

That could put the US campaign in Syria in dubious legal territory. The US is prohibited from waging war without the consent of Congress, but has been able to battle groups such as the Taliban, al-Qaeda, Daesh and their affiliates in Africa and the Middle East because of the 2001 Authorization for the Use of Military Force (AUMF) Against Terrorists. The bill was passed just three days after the attack on the World Trade Center on September 11 and allows the US to use "necessary and appropriate force" against the perpetrators. While Daesh didn't exist in 2001, the Obama administration argued that the bill's purview extended to the group as a successor of al-Qaeda.

It is difficult to imagine the Trump administration being able to make a similar argument in the case of Iran.

The Syrian government, poised to win the war in the country, with the al-Qaeda dominated Idlib province the only remaining stronghold of their opposition, considers the Americans to be illegal occupiers of their country. Iran, meanwhile, is in Syria at the request of the government.

At the Pentagon, Mattis assured reporters that there "is no daylight" between his stance on Syria and Bolton's, adding, "We're on the same sheet of music." However, Mattis gave a no less absurd characterization — if completely different — of the objective of a sustained US presence in the country.

"We are in Syria right now to defeat ISIS [Daesh] and destroy the geographic caliphate and make sure it doesn't come back the moment we turn our backs. So there is going to be a little while that we've got to work with the locals," Mattis said.

The US will continue to train local forces, he said. "Once we get those patrols going along the line of contact and we take out the rest of the caliphate, our goal would be to set up local security elements that prevent the return of [Daesh]," he said.

As recently as the spring of 2018, US President Donald Trump said, "We're knocking the hell out of [Daesh]," and promised, "We'll be coming out of Syria, like, very soon."

"Let the other people take care of it now."

Ninety-five percent of the area formerly run by Daesh in Syria and Iraq has been liberated. According to a live map of the conflict, Daesh currently only contests one region in the country — Deir ez-Zor.

The Syrian Observatory for Human Rights, a Syrian war "monitor" run by one man, rebel-sympathizer Rami Abdulrahman, and funded by the UK Home Office, reported that 400 Daesh members were offered passage from Deir ez-Zor to the Idlib province by the government. Damascus, however, accused the United States of transporting the terrorists in an "air landing operation," according to Syrian state media.

Idlib became increasingly dominated by al-Qaeda affiliates as the government allowed them passage after liberating major cities and provinces — such as Aleppo — from them.

The US vociferously protested the prospect of a Syrian offensive on the al-Qaeda safe haven in Idlib province, Sputnik News has reported. After Russia and Turkey struck a deal to demilitarize the area around the province in order to avert an all-out bloodbath, the Syrian Arab Army turned its attention towards Deir ez-Zor to finally, completely eradicate Daesh from the country, Sputnik News reported on Monday.