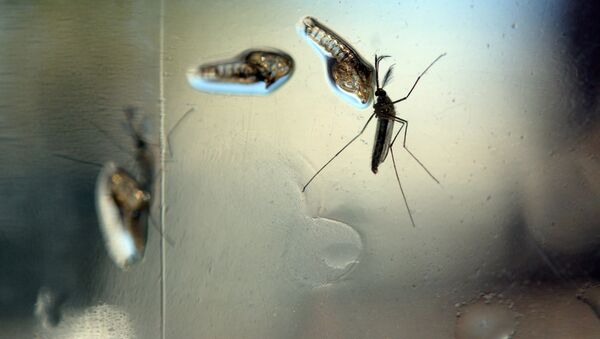 © AFP 2021 / MARVIN RECINOS
Subscribe
Officials of a medical college in India’s western state of Rajasthan have revealed that an octogenarian lady was tested positive for Zika virus infection, but was sent home after symptoms improved. There has been no confirmation, though, on whether other suspected cases are being monitored.

In a fresh case of Zika infection, an 85-year-old woman in the Indian state of Rajasthan, which is a popular tourist destination, has tested positive for the mosquito-borne virus. The hospital administration has alerted the government on the spotting of the virus and steps are being taken to contain its spread.

The resurfacing of the virus in India was reported by Indian news agency PTI on Sunday, quoting the Sawai Man Singh (SMS) hospital administration in Jaipur, the capital of Rajasthan. Officials of the medical college have not given any further details on the possibility of any more cases of the virus infection.

"The woman was admitted to the Sawai Man Singh (SMS) hospital on September 11 with joint pain, redness in eyes and weakness but she tested negative for dengue and swine flu. Samples were then sent to the National Institute of Virology in Pune for a test of Zika virus and the report came out positive," principal of the SMS medical college Dr. U.S. Agrawal told the media.

India Begins Testing Drugs for Zika, Chikungunya and Dengue
The woman, a resident of the Shastri Nagar area in Jaipur, was discharged from the hospital a few days ago after her condition improved. The hospital administration has alerted the state health department, Dr. Agarwal added.

A health expert is of the opinion that though the detection of a single case should not cause panic, the administration should definitely keep vigil.

"The infection shows symptoms such as mild fever, skin rash, conjunctivitis, muscle, and body ache. The fact is that only about 20% of patients show symptoms that usually last up to a week and hence it is unlikely to detect with symptoms. The situation in the latest news from Jaipur is not a case to panic but certainly a fit opportunity to monitor and increase surveillance. The administration is taking all steps in this regard here," Dr. Nilesh Kumar, a senior health consultant in Jaipur, told Sputnik.

The Zika virus is a mosquito-borne virus that was first identified in Uganda in 1947 in monkeys. It was later identified in humans in 1952 in Uganda and the United Republic of Tanzania, according to the World Health Organization. In India, three earlier cases of Zika infections were spotted two years ago. Although the infection is non-fatal, there is no treatment or vaccine for the Zika infection.

000000
Newsfeed
0
New firstOld first
loader
LIVE
Заголовок открываемого материала
Access to the chat has been blocked for violating the rules . You will be able to participate again through:∞. If you do not agree with the blocking, please use the feedback form
The discussion is closed. You can participate in the discussion within 24 hours after the publication of the article.
To participate in the discussion
log in or register
loader
Chats
Заголовок открываемого материала
Worldwide
InternationalEnglishEnglishMundoEspañolSpanish
Europe
DeutschlandDeutschGermanFranceFrançaisFrenchΕλλάδαΕλληνικάGreekItaliaItalianoItalianČeská republikaČeštinaCzechPolskaPolskiPolishСрбиjаСрпскиSerbianLatvijaLatviešuLatvianLietuvaLietuviųLithuanianMoldovaMoldoveneascăMoldavianБеларусьБеларускiBelarusian
Transcaucasia
ԱրմենիաՀայերենArmenianАҧсныАҧсышәалаAbkhazХуссар ИрыстонИронауОssetianსაქართველოქართულიGeorgianAzərbaycanАzərbaycancaAzerbaijani
Middle East
Sputnik عربيArabicArabicTürkiyeTürkçeTurkishSputnik ایرانPersianPersianSputnik افغانستانDariDari
Central Asia
ҚазақстанҚазақ тіліKazakhКыргызстанКыргызчаKyrgyzOʻzbekistonЎзбекчаUzbekТоҷикистонТоҷикӣTajik
East & Southeast Asia
Việt NamTiếng ViệtVietnamese日本日本語Japanese中国中文Chinese
South America
BrasilPortuguêsPortuguese
NewsfeedBreaking
17:38 GMTPoll: Kamala Harris & Michelle Obama Dems' Top Choices for 2024 Race If Joe Biden Decides Not to Run
17:27 GMTHunter Biden Received 3-Carat Diamond on Top of $10M a Year Deal With Chinese Businessman, Book Says
17:17 GMTWill the Maxwell Trial Expose Epstein's Rich & Powerful Friends or Turn Into Another Cover-Up?
17:12 GMTSouth Africa's Health Minister Unhappy With International Reaction to Omicron Strain
16:32 GMTKremlin: Anti-Russian Campaign Could Be Used to Distract From Kiev’s Planned Military Op in Donbass
16:11 GMTGermany Warns US Congress Nord Stream 2 Sanctions Will 'Damage Transatlantic Unity', Docs Show
15:54 GMTPrince Harry Lashed Out at Prince William Who Asked Him Not to Rush Things With Meghan, Book Claims
15:45 GMTPoland Ready to Help Finance Return of Migrants Stuck at Border With Belarus to Home Countries
15:05 GMTTwo Iranian Seamen 'in Good Health' After Being Rescued by US Navy Ship in Gulf
14:51 GMTThe Omicron Strain: What is Known About New COVID-19 'Variant of Concern'
14:47 GMTAustrian Chancellor Speaks for Proceeding With Nord Stream 2 Pipeline Project
14:43 GMTKyrgyz Lawmaker Detained on Suspicion of Plotting a Coup - Source
14:19 GMTBiden's Attempt at Sending Message of Return to Normalcy Thwarted by New COVID Variant
14:00 GMTMacron Bashed for 'Throwing Toys Out of Pram' as Patel Uninvited to EU Talks on Channel Crossings
13:47 GMT'Leaked' Ballon d'Or Result Confirms Lionel Messi as Winner, But Dutch Pundit Blasts PSG Forward
13:40 GMTUK Royal Air Force Accused of 'Woke B***hery' After It Ditches Airwomen and Airmen for Aviators
12:57 GMTOpposition Slams Indian PM as Modi Skips All-Party Meeting a Day Before Winter Session of Parliament
12:45 GMTIranian Nuclear Chief: Israel Should Check Its Capabilities Before Threatening to Attack Tehran
12:13 GMTStorm Arwen: Third Person Dies in UK, 240,000 Residents Left With No Power in England
11:19 GMT'Asleep at the Wheel': UK Bashed as China Has Pumped $900 Bln Into Commonwealth Nations Since 2005