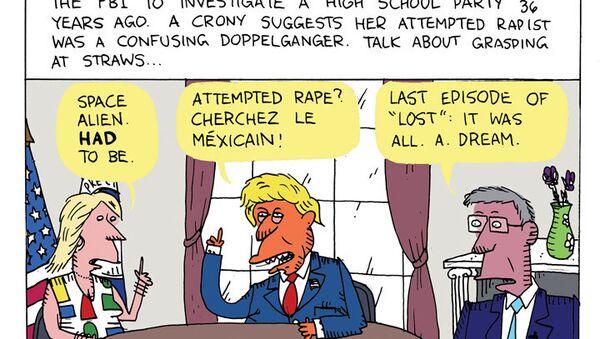 © Sputnik / Ted Rall
Subscribe
Speaking with Fox News host Sean Hannity, Trump broke his Kavanaugh-related silence Thursday to ask a question clearly occupying his mind ahead of his Las Vegas rally: “Why didn’t someone call the FBI 36 years ago” to report the alleged sexual abuse perpetrated by the SCOTUS hopeful?

With the truth unclear and another accuser coming forward ahead of Christine Blasey Ford's Thursday hearing, US President Donald Trump's recent opinions concerning allegations against the SCOTUS nominee are raising eyebrows.

In addition to Trump assuming a survivor of sexual assault would contact the FBI, the US president doubled-down against Kavanaugh's first accuser Monday, telling reporters he is "with [Kavanaugh] all the way," despite a second woman coming forward with accusations against the SCOTUS nominee.