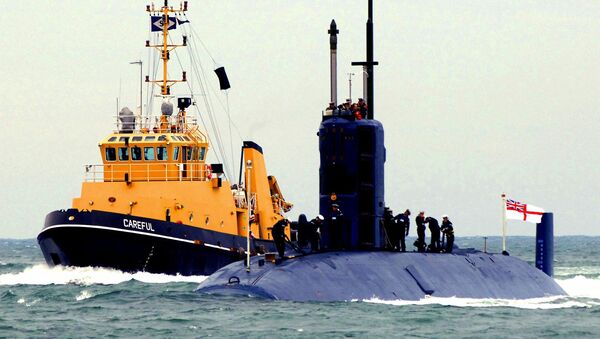 © AP Photo / Neil Munns
Subscribe
In early September, a number of media outlets reported that the UK had dispatched a nuclear-powered submarine carrying cruise missiles capable of hitting ground targets, to the Mediterranean.

The UK didn’t send its submarines to the Mediterranean to strike Syrian government forces amid expected false flag chemical attacks in the country, the Daily Mail reported, citing an unnamed source in the Ministry of Defense.

“We had no assets on location,” the insider said.

According to the media outlet, UK Prime Minister Theresa May ordered airstrikes against Syria earlier this year in response to the alleged use of chemical weapons, while other British news agencies reported that submarines loaded with cruise missiles were on their way to the Mediterranean.

Meanwhile, the Daily Mail suggested that the UK’s Armed Forces are “under-equipped, underfunded and under-trained.”

US Sub Spotted Near Mediterranean Amid Warnings of Staged Chem Attack in Syria
The authors of the article conducted an investigation into the state of British defense capabilities and concluded that due to spending cuts imposed by the government, the Army, Navy and RAF “all struggle to meet day-to-day commitments” to protect the UK and take part in NATO’s collective security, let alone prepare to respond to other potential new threats.

The media outlet further cited some statistics suggesting that at the climax of the Cold War, the army was 163,000 strong, but that now the strength is around half that figure as a result of a number of reforms launched under David Cameron’s government in 2010.

READ MORE: From Pills to the Pillory: Daesh-Linked Pharmacist from UK Detained in Syria

Moreover, the new government seeks to reduce that number to 50,000, “at which point the British Army, once feared and revered all over the world” would be half the size of the French army and smaller than armed forces in Italy, Spain and Germany, the Daily Mail wrote.

UK Submarine Reportedly Enters Mediterranean Amid Expected Provocations in Syria
The news agency claimed that in February 2017, 21 of the RAF’s 67 Tornado GR4 bombers and 43 of its Typhoon fighters were “in bits,” while the British military showed the worst results during drills held last year in the US because all the weapons at their disposal were inadequate for military operations.

Earlier this month, several media outlets reported that a British Trafalgar-class submarine, the HMS Talent, had sailed into Gibraltar. The sub has the capacity to carry up to 30 Tomahawk cruise missiles, capable of striking ground targets.

The reports came amid the Syrian army’s looming offensive against remaining terrorists in the province of Idlib and multiple warnings issued by the Russian Defense Ministry that militants were preparing provocations with the use of chemical weapons in the same region.

Moscow further warned that terrorists might blame the attack on the Syrian government in order to provoke a new round of Western airstrikes against Damascus.

000000
Popular comments
Ironically the UK Defence Budget is virtually the same as Russia's. Compare the two nations, then decide which one spends wisely?
anne00marie
24 September 2018, 10:16 GMT3
000000
Gradually they will shrink to the size of some African third world army so their transatlantic friends can bomb them into oblivion.