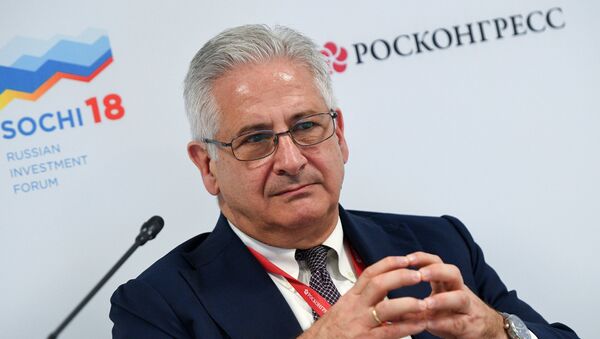 The US sanctions policy against Russia and Iran threatens Washington with unwanted friction with its partners, while related restrictions on business freedom has already provoked a growing domestic debate over the excessive use of sanctions in the US policy, Alexis Rodzianko, the president and CEO of the American Chamber of Commerce in Russia said.

"I think it’s beginning to be a debate in the United States as to using sanctions excessively or that sanctions themselves become the policy rather than instrument to accomplish policy is the risk that’s being run. The issue of allies being annoyed is true, very true," Rodzianko said.

According to Rodzianko, the Nord Stream 2 project, for instance, is one of such examples where the interests of the United States and its EU allies, seeing energy cooperation with Russia as beneficial, strongly diverge.

"I think in the Russia-European context you don’t have to look much further than Nord Stream 2 to see that different approaches to that project and threat of sanctions against companies working in that project were not welcomed by America’s allies," he suggested.

In this regard, US President Donald Trump's Thursday remark that the United States was not planning to impose sanctions on companies involved in the Nord Stream 2 project was "the answer to very difficult set of discussions between the United States and its allies," according to Rodzianko.

The AmCham head noted that the US sanctions policy was also undermining the freedom of US companies to do business.

"Of course the way sanctions work, from the point of view of the American Chamber and American business is that they restrict the freedom of American persons and American businesses to do business. That’s the mechanism through which sanctions are applied. And of course business doesn’t like it, Americans don’t like it, they don’t like to be restricted in their freedom. But sometimes geopolitical interests are higher than the freedom of the US people to do business," Rodzianko pointed out.

Washington’s anti-Moscow sanctions have delivered the hardest blow to bilateral cooperation in financial and energy sectors, with US companies losing the Russian market as an attractive investment destination and seeking a more notable economic presence in the country, Alexis Rodzianko said.

"The areas that are most affected by sanctions, that affect American business, are the financial area where investment banking cannot do nearly as much business as it used to do and would like to do. Russia is a very good customer, very high-quality borrower and high-quality investment destination, but because of restrictions on the access of Russia to capital markets that business isn’t being done, nearly as much," Rodzianko said on the sidelines of the annual business and investment conference of AmCham.

He added that US companies would also like to be present in the Arctic where deals involving US technologies for fracking and shale oil extraction could be reached, but sanctions made it impossible.

According to Rodzianko, the uncertainty created by sanctions in the business climate is pushing potential Russian partners to find business partners elsewhere.

Business Remains Last Constructive Relationship Between Russia and US - AmCham
The United States has recently rolled out hefty sanctions against Tehran in the light of own withdrawal from the 2015 Iran nuclear deal and Moscow for its alleged "malign activities." The unilateral restrictions are accompanied by secondary sanctions targeting entities for doing business or maintaining defense cooperation with the designated nations.

The recent sanctions against the Equipment Development Department (EDD) of China's Central Military Commission (CMC) and its Director Li Shangfu buying Russia’s S-400 air defense systems and aircraft are one of such examples.