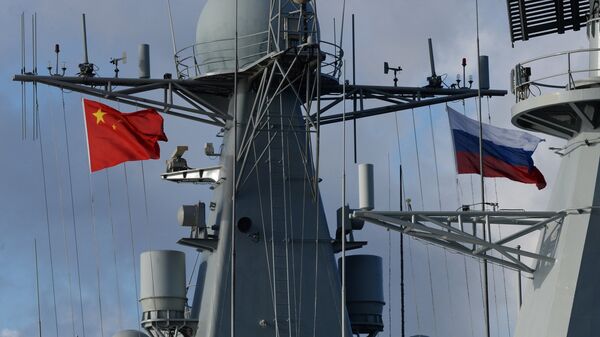 BEIJING (Sputnik) - The Chinese Defense Ministry on Saturday expressed protest and made strong representation to the United States over the US sanctions for arms purchases from Russia.

"The Chinese armed forces express their extreme indignation and strong disagreement. [The Chinese military leadership] has already made a representation and expressed protest to the US side," the ministry said in a statement.

The ministry also stressed that the US actions represent "the public trampling of the basic norms of international relations and a manifestation of great-power hegemonism."

The official statement further stated that Chinese-Russian defense cooperation was an example of normal interaction between sovereign nations, which complies with the norms of international law, so Washington had no right to interfere in it.

On Thursday, the United States announced that it sanctioned the Equipment Development Department (EDD) of China's Central Military Commission (CMC) and its Director Li Shangfu for buying Russia’s S-400 air defense systems and aircraft in violation of the Countering America's Adversaries Through Sanctions Act (CAATSA).

US No Longer 'Hegemon' in South Asia Thanks to Russia, China - Pakistani Senator
Earlier, the US State Department stated in a press release that it would continue to pursue sanctions under CAATSA, and it urged all countries to end relationships with the Russian defense and intelligence sectors, "both of which are linked to malign activities worldwide."

In August 2017, The United States passed the CAATSA legislation as a reaction to Russia's alleged interference in the 2016 US presidential election. In its turn, Russia has denied all allegations, calling the accusations "absurd."