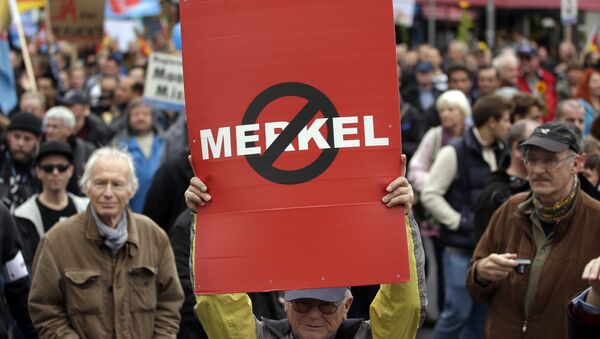 © AP Photo / Michael Sohn
Subscribe
After weeks of controversy over migration policy and anti-migrant protests, the right-leaning Alternative for Germany (AfD) party has pushed back the German Social Democrats as the second strongest political force. They have shared leading positions with Angela Merkel’s Christian Democratic Union for years. The CDU is also losing points.

Germany's two ruling parties, the Christian Democratic Union with its Bavarian sister party, the Christian Social Union and Social Democrats (SPD), would get 45 percent of the votes in the parliamentary elections, if taken held Sunday, as a recent poll by the broadcaster ARD revealed.

If people were to vote now, the Alternative for Germany party, which has advocated for stricter control over migration and got seats in the Bundestag for the first time in the 2017 elections with 12.6 percent, would become the second strongest force in the Bundestag and score a record-breaking 18 percent. This is one point more than the SPD, which only a decade ago was behind the steering wheel of the German government.

Angela Merkel’s Union also hit a record with its worst survey result since the first such poll taken 21 years ago with 28 percent.

After the SPD, came the Greens with a close result of 15 percent, the left-wing Linke (10 percent) and the FDP (9 percent).

German Interior Minister Horst Seehofer, leader of the CSU, also got a black mark with 59 percent of respondents considering him a bad federal interior minister. Losing support within his own party, Seehofer, however, scored extra points with his course only among the self-proclaimed supporters of the AfD, as 61 percent of them supported him.