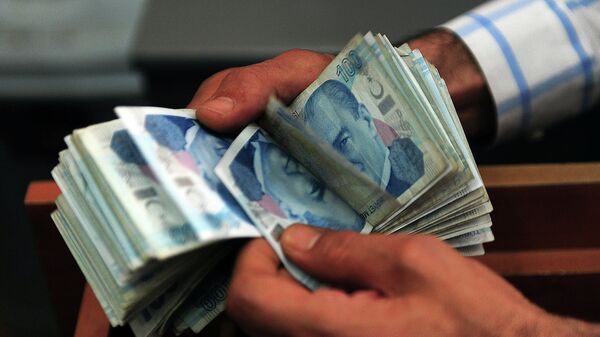 BRUSSELS (Sputnik) - The Organisation for Economic Co-operation and Development (OECD) has revised downwards it forecast for Turkey's real GDP growth in 2019 from 5 percent to 0.5 percent amid the recent pressures on the Turkish lira, the organization's interim economic outlook, released on Thursday, said.

Turkey's growth prospects in 2018 have also weakened – from 5.1 to 3.2 percent, according to the document.

The OECD also noted that the exchange rate of Turkish lira (vis-a-vis US dollar) had decreased by 41 percent.

According to the outlook, the slowdown in trade growth and the widespread political uncertainty are destabilizing factors for the global economy.

"Trade growth has stalled, restrictions are having marked sectoral effects and the level of uncertainty on trade stances remains high. It is urgent for countries to end the slide towards further protectionism, reinforce the global rules‑based international trade system and boost international dialogue, which will provide business with the confidence to invest… With tighter financial conditions creating stress on a number of emerging economies, especially Turkey and Argentina, a strong and stable policy framework will be key to avoid further turbulence," OECD Chief Economist Laurence Boone said.

The OECD believes that the global economy will increase by 3.7 percent in both 2018 and 2019, which is lower than the evaluations from the previous forecasts.

According to the minister, the country's current account deficit will be reduced from 4.7 percent GDP to 2.6 percent GDP in 2018-2021.

The minister also revealed that as part of the mid-term program the country's authorities would boost exports, expand the availability of credit for businesses and save funds from the cost of the public bodies' maintenance.

Global trade has been in turmoil with a rise of protectionism, currency instability in a number of countries, commodity price fluctuations as well as so-called trade wars involving mainly the United States and sanctions used as a geopolitical tool.

Turkey retaliated with some $533 million of tariffs on US imports — including cars, tobacco and alcoholic drinks — and threatened to boycott US electronic goods, above all iPhones.