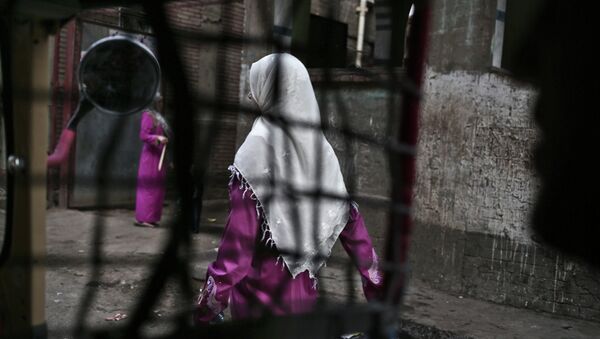 The social media have removed a sponsored tweet from a Muslim women’s group justifying the "circumcision" of girls for violating its policy following a backlash from enraged netizens slamming it for advertising girls’ genital mutilation. By the time it was removed, the video had been shown about 30,000 times to users who didn't follow the group.

The video posted on Twitter and sponsored by the Shia group Dawoodi Bohra Women for Religious Freedom promoted so-called female “circumcision,” or “khafiz,” on girls, triggering a wave of discontent against the social media network's management.

"My daughters have also undergone khafz, and they're growing up as perfectly as other children of their age. As a mother, I can never do anything to harm them" says Arwa Sohangpurwala, Chartered Accountant, Kolkata.#FCisNotFGM#VoiceOfADawoodiBohraWoman pic.twitter.com/t2MIPAf2Zk

​The sponsored post was viewed 30,000 times, including by  users who didn’t follow the group’s accounts. One of the DBWRF members said: “My daughters have also undergone khafiz, and they're growing up as perfectly as other children of their age. As a mother, I can never do anything to harm them."
The group argued on their website that this shouldn’t be confused with  female genital mutilation (FGM).
However, the post enraged many users, who pointed out that khafiz is indeed mutilation.

How can parents permanently nick a child’s genitals to pursue their own religious goals? For me this is assault on kids…this is a criminal act.

I agree. These people are promoting khafz, which is a form of FGM, a practice that is banned globally.

This woman is openly advocating #FGM on @twitter and she is also stating that she will cut her daughters. This is what we have to deal with. #FGM is #VAWG and this video sums up why I believe women who have had #FGM and have daughters should be on a register. https://t.co/BYvqP3spbi

God forbid someone doesn't want to see a promotion of FGM on their timeline.

​Many addressed the Twitter safety watchdog, insisting such publications shouldn’t be promoted or posted at all.

Why such tweets are being promoted??? @TwitterIndia

@TwitterSafety how are you allowing these tweets to be promoted???

I don’t understand why her account is still on Twitter. They are quick with many people to suspend their accounts. We need to report it.

Please stop such tweets, which justifies FGM.
Such moronic views shouldn’t be published.
I am blocking #DBWRF@dbwrf herewith.

“This was a promoted tweet and was removed for violation of our policies,” its spokesman commented. However, the social media management let the original post stay on the DBWRF account.

The group, in turn, distanced itself from FGM.

The group, Dawoodi Bohra Women’s Association For Religious Freedom (DBWRF), said that khafz was a harmless religious practise that was being followed for centuries, FGM was unwarranted and it should be abolished. — @ThePrintIndia #FCisnotFGMhttps://t.co/YfCHgcn8ai

​They sated on the web-site that circumcision is a "removal of a speck of superficial skin, a simple gentle process in which there is negligible, if any, pain." However, the World Health Organization classifies even the tiny removal as FGM, harming girls and women in many ways.

According to Unicef, more than 200million women and girls have had FGM procedures around the globe.