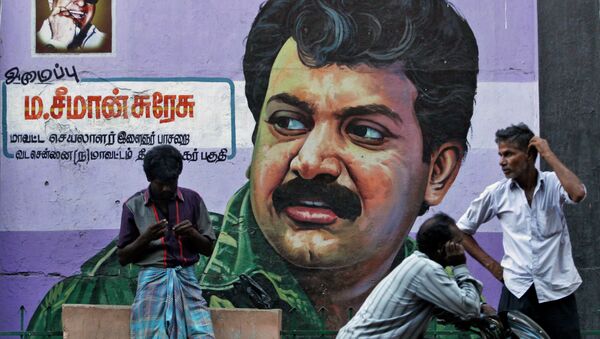 © AP Photo / Arun Sankar K.
Subscribe
Daesh* is one of a number of terrorist groups banned in the UK. Sputnik looks at some of the more obscure groups which have also been made "proscribed organizations" by the British government.

In 2016 the then Home Secretary, Amber Rudd, agreed to add National Action to the UK's schedule of proscribed organizations — it was the first right-wing terror group to be put on the list.

One of the group's members was jailed in July after planning an attack on Labour MP Rosie Cooper.

The list, drawn up under the Terrorism Act 2000, includes a variety of Islamic extremist groups, Irish republicans and Ulster loyalists, far-left splinters and others.

NC2 provides for an offence under the Terrorism Act 2000 of entering, or remaining in, an area outside the United Kingdom that has been designated in regulations made by the Secretary of State for the purpose of protecting the public from a risk of terrorism.

Daesh has carried out or claimed responsibility for numerous terrorist atrocities in the Middle East and Europe since 2014 — including two attacks in Brussels in March 2016 which killed 32 people and the truck attack in Nice, France, which killed 84 people.

Other groups who are on the list include al-Qaeda, the Provisional IRA, the Ulster Volunteer Force and their rivals Ulster Defence Association along with the Red Hand Commando and Ulster Freedom Fighters, cover names which were used by the UVF and UDA respectively.

Scrawl further down the list and you will find a random bunch of obscure groups, many of whom have never inflicted any casualties anywhere, let alone in Britain.

Under the terms of the Terrorism Act the Home Secretary must take into account "the nature and scale of an organization's activities", "the specific threat that it poses to the UK" and "the extent of the organization's presence in the UK."

In light of that last criteria it may seem odd the 17 November Revolutionary Organisation (N17) — a left-wing terror group which was set up in the 1970s to combat the Greek military junta and its US backers — is still on the list.

Three more people charged this evening with membership of the banned neo-Nazi terror group, National Action. A 17-year-old boy from Nottingham and two men from Birmingham.

November 17 has not carried out a terrorist act since June 2000 — when it murdered British military attaché Stephen Saunders in Athens — and most of its members were jailed in Greece in 2002 after a trial.

Other proscribed organizations include the Abu Nidal Organisation — a Palestinian, anti-Zionist group which was responsible for the attempted assassination of Israeli ambassador Shlomo Argov in London in 1982 — which has been defunct since 2002, when its leader Abu Nidal died in exile in Baghdad.

"Women's subjugation is a complicated social issue. This is a cultural injustice that has infected our society for centuries. Our movement has resolved to uproot this social inequity." — National Leader V. #Prabhakaran#TamilWomen #TamilEelam #LTTE pic.twitter.com/86gLi4ola0

​Fighting For 'Freedom' in Kashmir, Punjab and Turkestan

Even more obscure are Lashkar e Tayyaba (LT), which wants an Islamic state carved out of Indian Kashmir, Babbar Khalsa (BK), which wants a Sikh homeland — Khalistan — in the Indian Punjab, and Turkestan Islamic Party (TIP) and Hizb al-Islami al-Turkistani (HAAT), which want an independent Islamic Uighur state in the Chinese state of Xinjiang.

The Home Office has even included a group known, in Turkish, as The Hasty Ones.

UK Police doing terror raids over Extremist Activity in India. Canada must do same. Khalistan is cooking in UK & Canada in name of Referendum 2020

They are the Turkiye Halk Kurtulus Partisi-Cephesi (THKP-C), a left-wing Kurdish group who according to the Home Office now ‘operates as a pro-Assad militia group fighting in Syria and has developed increased capability since the Syrian insurgency".

Under the legislation introduced in 2000 under Prime Minister Tony Blair it is illegal to not only commit acts of terrorism but also "promote or encourage terrorism", including the "unlawful glorification of terrorism".

In 2004 British Muslim rappers Sheikh Terra and the Soul Salah Crew produced a song, Dirty Kuffar, which teamed up jihadist lyrics with a disturbingly catchy tune and video clips of western leaders, fighting in Afghanistan and Iraq.

A kuffar is a term of abuse for someone who does not believe in the fundamental principles of Islam.

The video was widely available on the internet and was mentioned in a number of terrorist trials but in 2016 it was finally taken down by YouTube.

In 2010 I was talking to a customs & border 'protection' agent. He told me about his training & a certain 'jihadi' music video they were shown & told to look out for.

I pulled my media player out & played Dirty Kuffar from SD card. His eyes went wide & the color left his face.🙈

Now the only version on YouTube is a poor quality version in which members of the Israeli Defense Force dance and clown about while playing the song in the background.

But YouTube also includes a number of videos made to promote or glorify other groups on the list, including the LTTE (Tamil Tigers), who were defeated by the Sri Lankan Army in 2009.