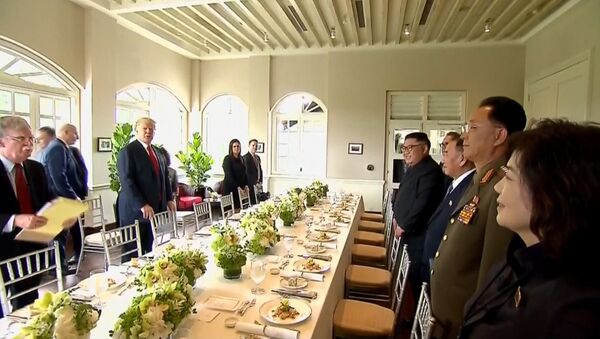 WASHINGTON (Sputnik) - US President Donald Trump said on Wednesday that the United States has made "tremendous" progress with North Korea, and the entire situation on the Korean peninsula has "calmed down."

"We're making tremendous progress with respect to North Korea," Trump told reporters. "Prior to my coming into office a lot of people thought it was inevitable we were going to war in North Korea and now we're, the relationships, I have to tell you, at least on a personal basis are very good. It's very much calmed down."

Following a summit on Tuesday and Wednesday in Pyongyang, the leaders of North and South Korea announced a military agreement to end large-scale artillery exercises and flights near the demilitarized zone.

Chairman Kim Jong-un also agreed to allow international experts to monitor the closure of the Dongchang-ri missile engine testing facility and launch pad, as well as to permanently close the nuclear facilities in Yongbyon, as long as the United States carries out corresponding actions.

There are no details yet on what those "corresponding actions" by the United States would entail.

The situation on the Korean Peninsula has improved since the start of the year, ahead of this third bilateral meeting between Kim and South Korean President Moon Jae-in.

READ MORE: US Must ‘Show Commitment' to Peace Talks with North Korea — Scholar

On June 12, Trump and Kim met in Singapore, where they reached an agreement that stipulates North Korea will denuclearize in exchange for a freeze of the US-South Korean military drills and potential sanctions relief. No concrete time frame was announced for achieving these goals.