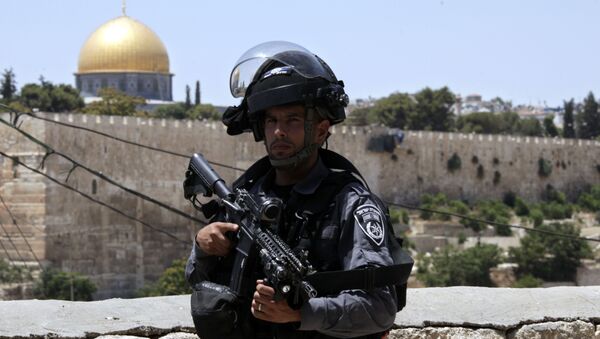 TEL AVIV (Sputnik) - Israeli police officers shot and killed a Palestinian who attacked a passerby and the policemen with a "sharp object" in Jerusalem, the press service of law enforcement agencies reported Tuesday.

"The police squad that operated… next to the Jerusalem Old City, neutralized the terrorist who attempted to attack the Jewish pilgrim and the policemen themselves," the statement said.

Palestinian Teenager Stabs Israeli Citizen to Death in West Bank - IDF
The police say that the suspect first knocked the passerby, and then, waving a "sharp object", rushed in the direction of law enforcement officers.

Apart from the killed attacker, no one was injured in the incident, the police said.

The incident occurred before the start of the most holiest Jewish holiday, Yom Kippur.

The official Palestinian agency WAFA reported the death of a man who was identified as a 26-year-old resident of the city of Kalandia in the West Bank.

On Sunday, a Palestinian man armed with a knife killed an Israeli citizen, who also had US citizenship, in the West Bank. A series of similar attacks began about three years ago, with over 50 Israelis and foreigners killed over this period.