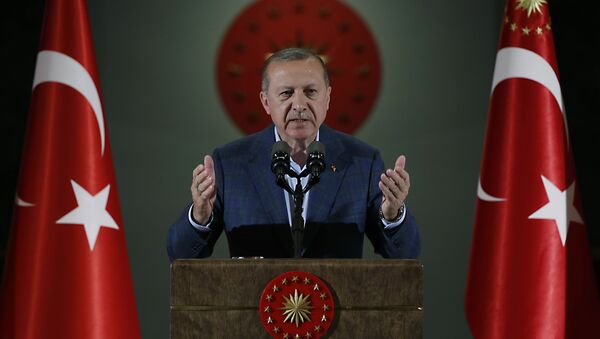 © AP Photo / Presidential Press Service/Pool
Subscribe
The Turkish president will reportedly have a chance to take part in the ceremony and directly speak to the country’s Turkish community amid an upcoming state visit, which has already sparked debates in Germany, where many politicians have slammed Recep Tayyip Erdogan’s authoritarian policies, including the persecution of journalists.

President Recep Tayyip Erdogan will officially open the central mosque of Germany’s Turkish-Islamic Union for Religious Affairs (DITIB) in Cologne on September 29 during a state visit. The organization has announced that it has received confirmation that the Turkish president will attend the mosque opening ceremony.

However, Laschet’s office denied that he’s going to attend the grand ceremony. While stressing the importance of open and critical dialogues pertaining to international relations, his office claimed that the DITIB’s mosque opening wasn’t the right place.

The DITIB, which runs over 900 mosques in the country, is formally an independent German association. However, its imams are often sent by a Turkish religious body, namely the Directorate of Religious Affairs Diyanet, which reports to the government. Some of them are even accused of spying on Erdogan’s opponents in Germany.

The mosque in question is located in Cologne's predominantly Turkish neighborhood, Ehrenfeld, and with a capacity of 1,100 people has been named the largest mosque in Europe. Although the first prayers were held there a year ago, it hasn’t been officially opened yet.

Speculations on Erdogan opening Cologne’s central mosque have fueled debates ahead of his two-day state visit to Germany on September 28.

According to earlier reports, cited by the German media, during his trip he wants to meet with German Chancellor Angela Merkel twice. He’s also expected to attend a state banquet and have talks with German Federal President Frank-Walter Steinmeier. These plans have sparked criticism among German politicians and journalists as the reports came shortly after the imprisonment of a journalist working for Die Welt, Deniz Yücel, on terrorism charges. Tensions have been growing between Germany and Turkey since Erdogan’s crackdown on his opposition following the military coup in 2016.