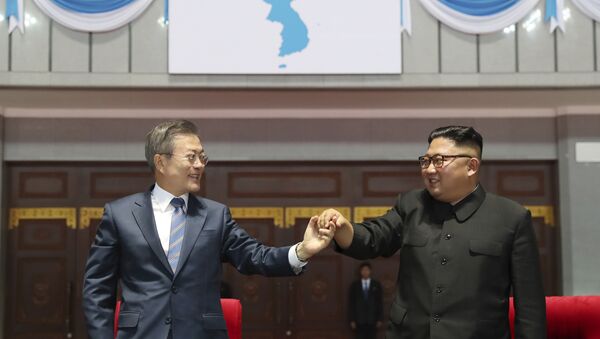 © AP Photo / uncredited
Subscribe
As South Korean President Moon Jae-in and North Korean leader Kim Jong Un concluded the second day of the inter-Korean peace summit in Pyongyang, it emerged that major headway had been made toward denuclearizing the peninsula and ending the 65-year-long war. The result, an expert told Sputnik, is that the ball is now in America’s court.

"Leaders of the South and the North have in fact announced the end of the war on the Korean Peninsula by their agreements," a spokesperson for the South Korean president's office said Wednesday, Sputnik reported.

While the two leaders arrived at a number of agreements for joint measures to increase contact between their two societies, which have remained almost completely apart since the Korean War broke out in 1950, the concords grabbing the most attention are those that cool international tensions. Kim promised to destroy key nuclear and missile test sites, while Moon made the pledge to remove the threat of war from the Korean peninsula. Both also agreed to remove personnel from the Demilitarized Zone that separates their two countries and to cease provocative military displays there as well, such as artillery exercises and flybys.

Wednesday evening, UN spokesperson Stephane Dujarric said in a statement that the UN's secretary-general, Antonio Guterres, welcomed the outcome of the summit and said, "now is the time for concrete action," Reuters reported.

The UN is ready to "further assist the parties in any way they deem appropriate," Dujarric said.

Dr. Christine Hong, assistant professor of transnational Asian American, Korean diaspora and critical Pacific Rim studies at UC-Santa Cruz, told Radio Sputnik's By Any Means Necessary Wednesday that the move was "a stark contrast" to US policy and that it "sets the stage so that the United States can take reciprocal measures," as it's pledged to do since the June 12 summit in Singapore between Kim and US President Donald Trump.

​Hong called the end-of-war declaration a "savvy move" by Moon and Kim. "What they're doing is, they're broadcasting to the world, and they're saying, ‘Look, what we want more than anything, and what the democratic desire of the Korean peoples is, is for peace on this peninsula."

"It's a stark contrast to what's been the kind of Janus-faced policy on the part of the Trump administration."

Hong noted that, in accordance with the June 12 agreement, North Korea has already taken several steps toward peace, including destroying its primary nuclear weapons test site and a major rocket site, while the US has only suspended one war exercise. Hong said that was "not nothing," but she also noted that US policy has been inconsistent between Trump in the White House, US Defense Secretary James Mattis in the Pentagon and Ambassador Nikki Haley at the United Nations.

"What this recent summit does is it actually sets the stage so that the United States can take reciprocal measures," Hong said, referring to US actions that might be taken to relieve its current campaign of maximum pressure against Pyongyang.

The scholar told hosts Eugene Puryear and Sean Blackmon that the pressing question revolves around how much Washington wants peace on the Korean Peninsula.

Hong noted that by "cynically… raising a specter" of a nuclearized North Korea, the US government has been able to justify to the American people a drastic military expansion in the Asia-Pacific region to encircle China in the decades since the end of the Cold War. Indeed, the scholar noted that on the Korean Peninsula, the cold war never really ended.

So, Hong continued, when the mainstream media presents US congressmen who dissent from the president's peace policy in Korea as "curbing the rash impulses" of Trump, "a figure who knows nothing about foreign policy whatsoever," what news outlets are ignoring is that "the South Korean people democratically deputized" Moon, by ousting his aggressively pro-US predecessor, Park Geun-hye, "to negotiate for peace and reconciliation with North Korea."

Hong said the inter-Korean summit also raised a question about the US' influence over South Korea: "What does Moon Jae-in mean when he says ‘all threats that can cause war on the Korean Peninsula'" will be removed? Aside from questions like the deployment of Terminal High Altitude Area Defense (THAAD) batteries by the US, which are ostensibly to counter the North Korean nuclear threat, "South Korea has never been a sovereign nation," according to Hong. That means that the question of removing "all threats than can cause war" is much broader than simply ordering South Korean forces to stand down, Hong said.