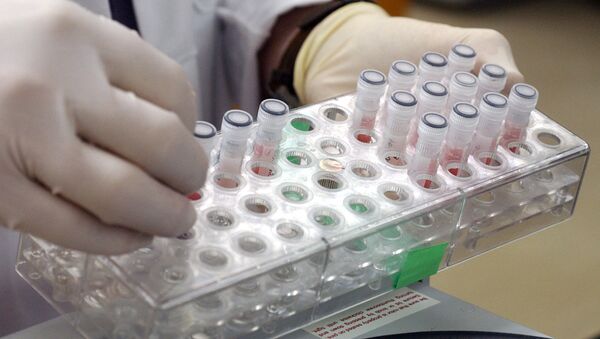 © AP Photo / ALLEN SULLIVAN
Subscribe
A group of researchers will search for links between genetics and depression in the largest study of its kind, experts announced. Organizations have hailed the initiative as a prolific step towards diagnosing and pre-screening patients using advanced early detection models.

The Genetic Links to Anxiety and Depression (GLAD) study will attempt to recruit 40,000 volunteers age 16 and older to contribute to the study's database to determine how much genetics play a role in mental health issues.

GLAD is a partnership between King's College London and the National Institute for Health Research (NIHR) Mental Health Bioresource. Participants can register for the website, complete a 30-minute questionnaire to determine eligibility, and submit a saliva DNA sample by post.

"By recruiting 40,000 volunteers willing to be re-contacted for research, the Glad study will take us further than ever before," said Dr. Gerome Breen, study lead and geneticist at King's College London.

"It will allow researchers to solve the big unanswered questions, address how genes and environment act together and help develop new treatment options."

Taking part is simple! Watch our lead investigators, Dr Gerome Breen and Prof Thalia Eley @KingsCollegeLon, explain why @GLADStudy is so important and how to join.  @psychgenomics@thaliaeley

"We're asking those who have experienced clinical anxiety or depression to complete a short survey and provide a DNA sample," said Prof. Thalia Eley, a research psychologist and study lead of King's College London.

"We want to hear from all different backgrounds, cultures, ethnic groups and genders, and we are especially keen to hear from young adults. By including people from all parts of the population what we learn will be relevant for everyone."

Rethink Mental Illness also launched a campaign on Tuesday which aims to help young people, a particularly vulnerable demographic, to spot the signs of psychosis. Early symptoms of psychosis can range from hallucinations, delusions, or withdrawing from friends, the charity states.

The organization noted that psychosis affects 1 in 100 people and that most experience their first episode around age 18 to 24. Citing YouGov figures, it noted that 31 percent would know where to get help for psychosis.

56 percent thought psychosis was less common than it really is, and less than half were unconfident that they could spot symptoms like hallucinations (47 percent) and delusions (42 percent).

"You can experience psychosis for a wide variety of reasons," said Robin Murray, Professor of Psychiatric Research at the Institute of Psychiatry, King's College London, adding that mental illnesses such as schizophrenia or bipolar disorder can trigger psychotic episodes, or even drugs or extreme stress.

"Being aware of the early signs is a crucial first step in people getting the help they need."

"It is important for everyone to know where to turn if they need help, but many students don't think to sign up to their university's GP," said Brian Dow, deputy chief executive at Rethink Mental Illness.

"We would urge everyone to look out for your friends — if they are showing any of the early signs then encourage them to see their GP or go to A&E if you are worried about their immediate safety."