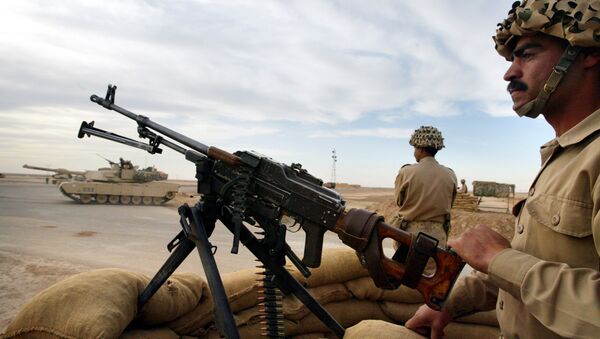 A former high-ranking MEK official confirmed long-held suspicions that Saudi Arabia has been financing the political-militant group bent on violent regime change in Iran through sophisticated channels to provide the group with valuables like gold and Rolex watches, according to a new report.

In an interview with Jordanian news outlet Al-Bawaba Tuesday, a former MEK member who oversaw the transfer of hundreds of millions of dollars' worth of materials explained how the group has stayed financially afloat.

Massoud Khodabandeh explained that 3 tons of solid gold, a minimum of four suitcases of customized Rolex watches and fabric that had been used to cover the Muslim holy site of Kaaba in Mecca were among the commodities shipped from Saudi Arabia to MEK operatives in Baghdad as part of the scheme. From there, the valuables would be sold on the black market in Jordan's capital, Amman, to Saudi-aligned merchants.

"Aided by two Iraqi and two Saudi representatives, Khodabandeh smuggled three trucks filled with gold bars from Saudi Arabia to Baghdad. He estimated that each truck held about a ton of gold, making the shipment's contemporary worth almost $200 million," Al-Bawaba reports. After selling the gold, funds would be sent to offshore MEK bank accounts, Khodabandeh said.

The report says that the US also supported the MEK by providing the UN Refugee Agency with $20 million in order to transport thousands of MEK members from Iraq to Albania. The US then gave Albania funds to construct a "military-style facility for the MEK, in which it is currently holed up."

War hawks in Washington point to the MEK as the most viable proxy force for bringing down the Iranian government. The group doesn't support within Iran, according to Saeed Jalili, a Tehran-based writer. "I have not heard anyone asking them [MEK] to make a comeback in Iran or anything like that," Jalili told Al Jazeera in March.

"There is a viable opposition to the rule of the ayatollahs. And that opposition is centered in this room today," John Bolton, once the US ambassador to the UN and now White House national security adviser, said during a speech at an MEK conference in Paris last year.

Bolton went so far as to conclude his remarks by predicting the overthrow of the Iranian government by the end of 2018, according to Iranian expat journalist Bahman Kalbasi. "Any that's why, before 2019, we here will celebrate in Tehran," Bolton said to a round of roaring applause.

"We resettled a lot of the MEK people from Iraq in Albania," Daniel Benjamin, the State Department's counterterrorism coordinator at the time, told Foreign Policy in April. "It became the goal of the US government to get them out of there. That is the reason they were delisted" from the US list of terror groups in 2012.

"It happened under the secretary's authority, not because they had met the requirements for not being a terrorist group," said Benjamin, who is now director of the Center For International Understanding at Dartmouth University. Hillary Clinton was the US secretary of state from 2009 to 2013, before John Kerry assumed the post until the arrival of the Trump administration in 2017.

"Bolton is positively predisposed to the MEK," a foreign policy Capitol Hill staffer told Foreign Policy in April, when Bolton joined the White House as national security adviser. "They will have some access to this White House at least."