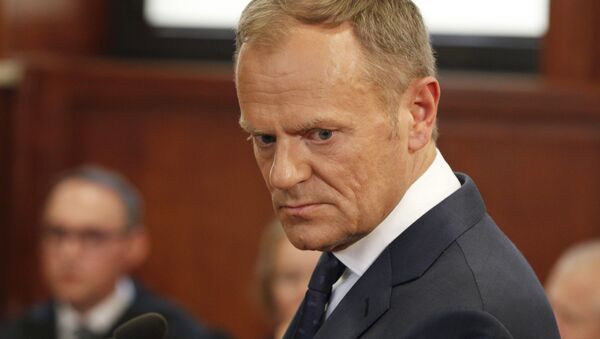 With the clock ticking on Britain’s withdrawal from the European Union, Brussels expects a mutually-acceptable divorce deal to be clinched before this year is out.

There is still a possibility that Britain will exit the European Union without any conditions agreed, European Council President Donald Tusk warned in a letter to European leaders, who will be meeting in Salzburg on Wednesday and Thursday.

Tusk emphasized that the United Kingdom and the European Union were entering "final weeks of negotiations," as there were only six months left before Brexit.

Brexit's Your Mess, Fix the Irish Border Issue or No Deal - Donald Tusk Tells UK
He invited the European Council to "review progress in these talks."

"We will discuss how to organize the final phase of the Brexit talks, including the possibility of calling another European Council in November," Tusk said.

He underscored the sides’ shared interest to limit the damage caused by Brexit.

"Let me recall that limiting the damage caused by Brexit is our shared interest. Unfortunately, a no deal scenario is still quite possible. But if we all act responsibly, we can avoid a catastrophe," Tusk noted.

On September 10, EU chief Brexit negotiator Michel Barnier said that Brussels and London need to agree on the terms of their divorce well before this year is out, so that they can be ratified by both sides.

He also said that the Brexit deadline could be extended to November from October, as earlier agreed.

With the Brexit deadline now less than 200 days away, the two sides remain divided on a number of issues, including the Irish border and customs arrangements.

READ MORE: Austria, Germany in Tune on Brexit Ahead of Salzburg Summit Talks