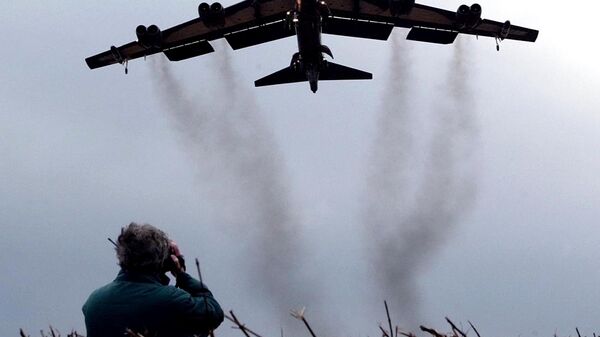 WASHINGTON (Sputnik) - The US Air Force must expand by a quarter the current number of its operational squadrons in order to address emerging threats from China and Russia, Secretary Heather Wilson said during remarks at the Air Force Association’s annual conference on Monday.

"To face the world as it is, with a rapidly innovating adversary, the Air Force we need should have about 25 percent more operational squadrons in the 2025-2030 time frame than the Air Force we have," Wilson said.

US Air Force's Mysterious X-37B Plane Spotted Above Netherlands (PHOTOS)
The US Air Force must boost the number of its operational squadrons from 312 to 386 in order implement the current National Defense Strategy, Wilson said.

Noting that the world has returned to the era of great power competition, Wilson said such growth should include five additional bomber squadrons, 14 tanker squadrons, seven fighter squadrons and seven space squadrons, among other increases.

Concerning the issue of emerging threats, Wilson highlighted the Vostok-2018, Russia’s largest military exercises in four decades, but emphasized China’s launch of its first aircraft carrier and the militarization of islands in the South China Sea.

Earlier today, the Trump administration has pledged to study and where necessary strategically invest in modernizing airports and bases across Greenland, Under Secretary of Defense for Policy John Rood confirmed in a Statement of Intent he signed on Monday.

"The US Department of Defense intends to analyze and, where appropriate strategically invest in projects related to the airport infrastructure in Greenland, including projects that may have dual civil and military benefits," the statement said.

Rood signed the statement during a visit to the US Thule Air Base in Greenland, a territory controlled by Denmark, a member of the US-led NATO alliance.

"This Statement of Intent lays out principles for investments in Greenland to enhance US military operational flexibility and situational awareness to address the changing security environment in the Arctic," said the statement, which is not legally binding under national or international law.

The new investments would seek to enhance US and NATO capabilities in the North Atlantic region, the statement said.

The potential expansion of the US Air Force would be the largest increase since the Cold War, according to data released from the Defense Department.