Indian Couple Gets Unique Wedding Gift – a Can of Petrol! 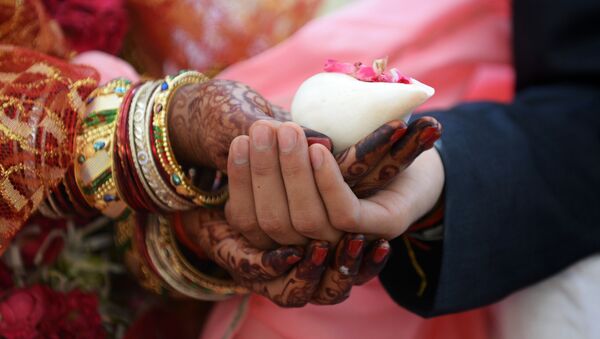 New Delhi (Sputnik): Considering petrol as a commodity worth being gifted, a group of youngsters in India’s Tamil Nadu carried a can of petrol to their newly wedded friend’s reception. The video went viral of social media, lending arsenal to the opposition that has been leading nationwide protests against fuel price hike.

The video now viral in the social media shows the young couple being greeted by friends and relatives during the wedding reception when all of a sudden a group of friends join in and hand them a can of petrol to which the entire crowd burst into laughter.

The video has emerged from the southern state of Tamil Nadu where petrol prices touched INR 85.15 ($ 1.17) per liter.

"The government is trying its best to give relief to the common man but provincial governments are not ready to share the burden. These kinds of gimmicks are only meant to gain publicity and nothing more than that," Sanjay Mayukh, media cell member of the ruling Bharatiya Janata Party told Sputnik.

Now that petrol has become a precious and expensive commodity it is an ideal wedding gift, Tamil Nadu begins the trend!

Meanwhile, the main opposition Congress party, taking a dig on the government, said that the petrol pumps will have to recalibrate their machines soon if the prices keep on increasing.

"Petrol pumps in India are made with only enough slots to display two digit cost per liter of the fuel. If the cost per liter crosses 99 marks, they will have to reinstall the machine," Congress spokesperson Abhishek Manu Sanghvi told a group of reporters on Monday.

Petrol makes a good wedding gift these days. Look at how happy the groom and bride are. 😂 #PetrolDieselPriceHike pic.twitter.com/a7DxK91IWZ

​#expensive_gift #petrol Mocking the steep hike in petroleum prices, a couple of friends gifted 5 litres of petrol as a gift at at a wedding reception at Cuddalore! https://t.co/UvEeCBs5Cd