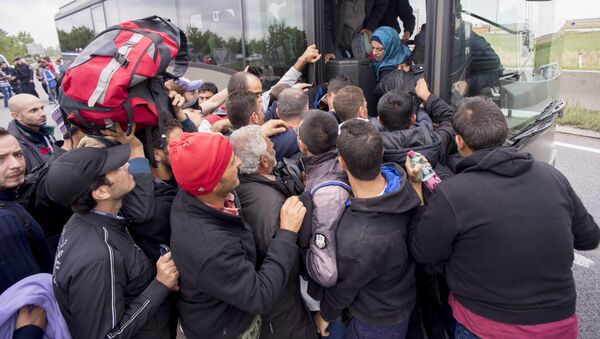 MOSCOW (Sputnik) - Budapest will continue its policy of rejecting mandatory migrant quotas despite the threat of EU sanctions, Hungarian Minister of Foreign Affairs and Trade Peter Szijjarto has noted.

"This was a highly politicized decision against Hungary based on the fact that Hungary rejects the obligatory quotas of redistribution of migrants. We will continue our migration policy meaning that no illegal migrants will be allowed to enter the territory of Hungary. We will not give up this policy," the minister told reporters ahead of the meeting with First Deputy Speaker of Russia’s Federation Council Nikolai Fedorov.

Szijjarto stressed that Poland and the Czech Republic had assured Hungary "that they would not vote in favor of sanctions against Hungary."

Defiant Orban Vows to Respond to EU Parliament's Punitive Measures
Last week, the European Parliament voted to proceed with disciplinary action against Hungary under Article 7 of the Treaty on European Union. The report prepared by the parliament earlier this year said Hungary was at "clear risk of a serious breach of EU values."

Depending on the results of future proceedings under Article 7, the country may have some of its membership rights suspended.

In July, Hungary withdrew from a UN global agreement on standard ways for countries to address migration-related issues. Budapest cited concerns over security as the reason for leaving the recently-agreed pact.

In June, the Hungarian parliament passed a bill that would criminalize helping undocumented migrants to stay in the country.

In accordance with the quotas for migrant redistribution across EU countries, each EU state is expected to take in a certain number of refugees. The system has been the source of a conflict in the bloc as several countries were unwilling to meet the requirements.