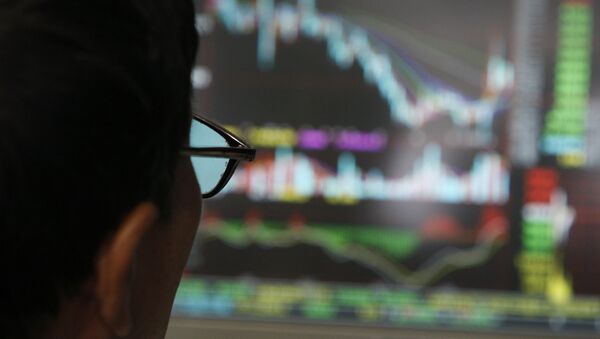 © AP Photo / Ng Han Guan
Subscribe
The total debt of the world economy is at its all-time highest after a decade of demand-side economics, monetary stimuli and loose fiscal policies – all of which might have contributed to the next big crisis.

Kristian Rouz – The global economy hit yet another record-high level of debt this month, as several major economies still appear to be stuck in their debt-driven models of GDP growth ten years after the international financial crisis.

The meltdown, signaled by the collapse of Lehman Brothers in the US, prompted a response from central banks and national governments all over the globe in the form of amounting huge budget deficits and monetary stimuli – and while policymakers in some countries have taken effort to normalize their balance sheets, others appear to be quite complacent.

"Public debt in advanced economies is at levels not seen since the Second World War. And if recent trends continue, many low-income countries will face unsustainable debt burdens," Managing Director of the International Monetary Fund (IMF) Christine Lagarde said.
The total debt of the world’s economy is currently estimated at an unprecedented $250 trln, which represents some 320 percent of the world GDP. This compared to roughly 280 percent back in 2008 – nominal debt at that point stood at some $173 trln.

This data raises the question of whether the post-crisis recovery of 2009-2016 has achieved its goal of improving the health and sustainability of the world economy.

"While a high debt burden isn't necessarily a problem by itself, it increases the vulnerability of the system to a shock – in particular, a shock that would lift interest rates," Jeffrey Kleintop of Charles Schwab & Co. said.

The majority of central banks in advanced economies have kept interest rates at ultra-low levels for several years after the 2008 crash, whilst also accumulating huge portfolios of government bonds on their balance sheets. Such policies were seen as helping household consumption, lending and business spending – but they also punished savers and fiscal hawks worldwide.

The global economy and the vast majority of households, businesses and national governments are now mired in debt. Despite the IMF and World Bank saying the world economy is robustly growing, it is still unclear whether this pace of growth would be enough to pay off the huge debt burden.

Cybercrimes Cost World $600Bln, 0.8% of Global GDP Annually - Think Tank
The World Bank said the global economy would expand at 3.1 percent this year, 3.0 percent in 2019, and 2.9 percent in 2020 – suggesting a gradual slowdown in economic expansion would fall in line with the currently ending 10-year business cycle.
Meanwhile, in the US alone, debt levels rose by 6.2 percent between 2009 and 2012, according to data from the Federal Reserve Bank of St. Louis. With the more recent fiscal stimulus in place – enacted last December by the Republican administration of President Donald Trump – US government debt is expected to gain further momentum.

However, US officials expect the robust economic growth to bring down the debt-to-GDP ratio by 2025.
During the period of 2008-2018, US household debt hit its highest at above $13 trln – but it actually fell as percentage of GDP. Same dynamics were observed in US financial corporations’ debt, whilst the US government debt and leverage of non-financial enterprises rose as a percentage of GDP.

This means Trump’s main challenge is to tackle the fiscal irresponsibility of big government in Washington and boosting the efficiency and productivity of the Main Street economy – which he says he’s actually trying to do.

READ MORE: ‘A Tax on US Consumers’: Trump Tariffs to Push Apple Product Prices Up

Other nations, however, are struggling to put together a plan for economic growth, which would not rely on debt as much as in the past ten years. For instance, many developing nations of Asia and Africa have welcomed Mainland China’s Belt and Road initiative, which offers development loans with, as Beijing claims, no strings attached.

Despite the initiative possibly alleviating poverty and economic inefficiencies in the participating countries, it is also poised to drive many third-world nations deeper into debt. Trump administration officials explicitly called China’s initiative “debt-trap” diplomacy, whilst the US Congress said economic growth projects across Africa and Asia are "at risk of debt distress today."

"Signs of strain, or outright crisis, have been seen in emerging markets around the world in recent weeks, including Turkey and Argentina," Mark Hamrick of Washington-based Bankrate.com said.

Vicious Cycle: World Bank Warns of Looming Global Economic Crisis
However, developing countries and their debt isn’t the biggest concern to global financial sustainability just yet. According to an IMF estimate from 2016, the three nations posing the biggest concern of debt distress are the US, Mainland China and Japan – which two years ago accounted for more than a half of the world’s total debt.

More recent reports have found that the situation is still roughly the same, despite other countries running into higher debt levels as well. Whilst the US and China appear to have acknowledged the challenge, other countries have no problem with higher debt.

In this light, some analysts have suggested the next big crisis might be coming – for the first time in the world’s economic history – from the developing world.