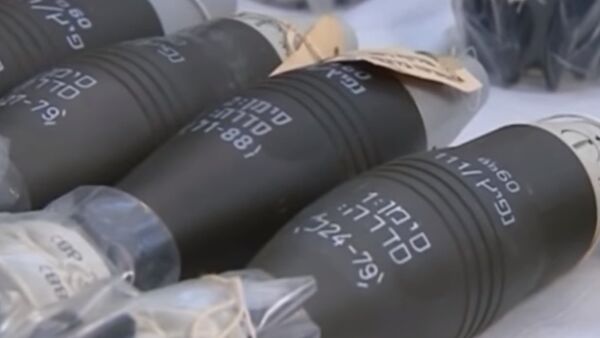 Syrian government forces regularly carry out mop-up operations in provinces liberated from terrorist and militant groups and have on multiple occasions discovered caches and depots of ammunition and weapons made in Western countries and Israel.

During a combing operation on Saturday, the Syrian army found loads of cannons, RPGs, rockets, small arms and ammunition, including Israeli, in one of Daesh’s* former strongholds in Hawz Yarmouk in western Daraa province, Fars News Agency reported.

Turkey Sends Huge Military Convoys to Idlib as Damascus' Op Looms – Reports
This is not the first time that the Syrian army has stumbled upon depots full of foreign-made arms left behind by militants in Daraa.

In July, they reportedly found RPG launchers, shells, gasmasks, minesweepers, mortars, heavy machine gun emplacements and TOW launchers produced in the US among the weapons that militants in the province handed over under a reconciliation agreement. Those arms were allegedly supplied by the US to the Free Syrian Army.

Most recently, Syrian government forces have found another weapons storage, supposedly abandoned by Daesh and Nusra Front, in the province of Quneitra, SANA reported. According to the media outlet, the weapons depots were full of medicines, automatic rifles, sniper rifles, machine guns and ammunition, with some of the arms made in the US and Israel.

Last month, the Russian General Staff confirmed that Syrian authorities had regained control over the provinces of Daraa, Quneitra and al-Suwayda due to the Russian Reconciliation Center’s efforts in persuading the militants to put down their arms and either relocate to Idlib or join the fight against Daesh and other terrorist groups.

*Daesh, also known as IS/ISIL/ISIS, is a terrorist group banned in Russia and many other countries.