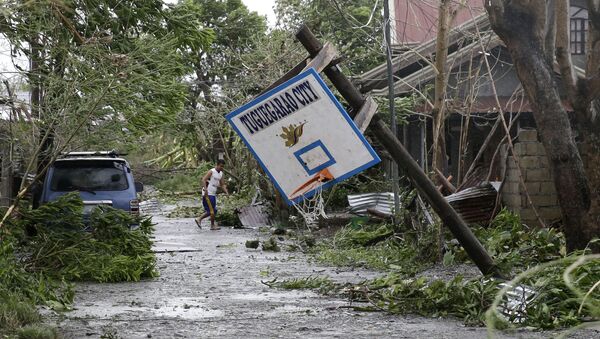 According to media reports, more than four million people are directly in the path of the storm, which has wind gusts reaching up to 330 kph.

State meteorological agency PAGASA, however, has reportedly downgraded typhoon's threat level, but warned the danger was far from over, with storm surges and heavy rains that had caused widespread flooding and landslides.

(Chapman) Torrential rain caused by Super Typhoon Mangkhut. While players are safe and sound enjoying a day of #mtg, here's a view of the entrance of KITEC where #gphk is being held. The Hurricane Signal No. 10 is currently in effect, and the typhoon is less than 100 miles away. pic.twitter.com/BbHuakkC6L

Philippines Presidential Adviser Francis Tolentino told Reuters that the landslides have caused 20 deaths in the Cordillera region on the main island of Luzon and four in nearby Nueva Vizcaya province, adding that a treefall in the province of Ilocos Sur resulted in another death.

The storm caused severe flooding in several provinces and in parts of the capital Manila. According to Reuters, local autorities plan to release water from dams, fearing rains could push water reservoirs to dangerous levels.

Mangkhut had been reportedly a category 5 storm for days since wreaking havoc in the US Pacific territories of Micronesia before heading towards the Philippines, where it is the 15th and strongest storm this year.