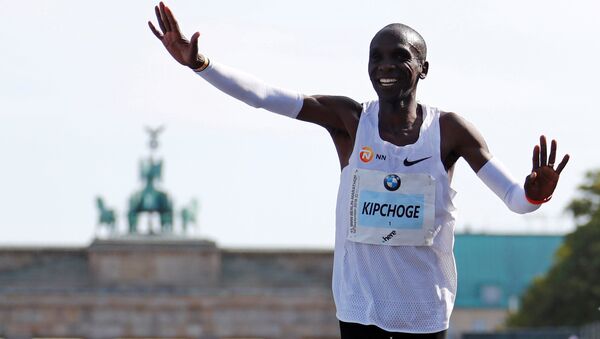 © REUTERS / Fabrizio Bensch
Subscribe
On Sunday, Kenyan Olympic champion Eliud Kipchoge set a marathon world record at the Berlin Marathon by finishing the race in two hours, one minute and 39 seconds, chopping an astonishing 78 seconds of the standing record.

The 33-year-old athlete beat the previous world record set in Berlin by Kenyan runner Dennis Kimetto, who won the Berlin race in 2014.

"I lack words to describe this day," Kipchoge said following his victory.

"They say you miss two times, but you can't miss the third time," he said, referring to his two previous attempts to break the world record in Germany.

The women's race was won by Kenyan Gladys Cherono in 2 hours, 18 minutes and 11 seconds.

Earlier this year, Kipchoge won the London Marathon for the third time.

"It was hard," he said at the time. "I ran my own race, I trusted my trainers, my program and my coach. That's what pushed me in the last kilometers."