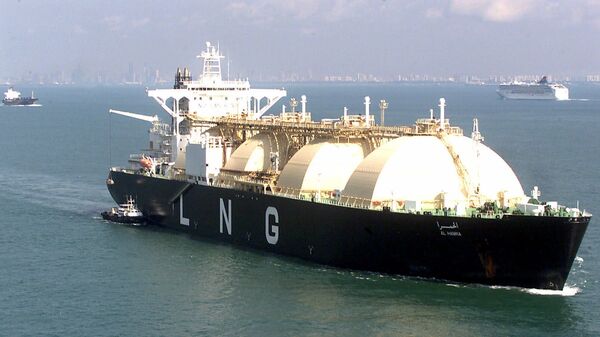 The US president has criticized European nations, specifically Germany, for continuing to buy Russian natural gas and supporting the construction of the Nord Stream-2 pipeline. Trump suggested that the EU should buy liquefied natural gas (LNG) from the US, despite it being more expensive.

Germany is unlikely to buy the LNG that Washington has offered it as an alternative to Russian gas as Berlin doesn't need it, the German business newspaper Handelsblatt wrote on September 13. The newspaper wrote that the only reason that the German chancellor would be interested in US LNG would be to appease US President Donald Trump ahead of crucial trade talks between the US and the EU.

At the same time, Handelsblatt rebuts point-by-point the arguments of US envoy to Germany Richard Grenell as to why Berlin would need American LNG. As Grenell noted himself, Germany doesn't have an LNG terminal and building one on the North Sea coast could be a project so costly that it has already been labeled a "white elephant" by critics, according to the media outlet.

Handelsblatt further noted that Germany plans to abandon fossil fuels as a source of energy by 2050, meaning that the terminal will be rendered useless in just 32 years. Moreover, the European country already has sufficient fuel for the transitional period — natural gas, which produces less emissions, costs significantly less than LNG (in additional to the terminal) and will be easily obtainable via Nord Stream-2. The business newspaper also mentioned that LNG supplies would send hundreds of "polluting tankers" across the Atlantic to Germany, which is trying to become a green country.

Handelsblatt put the last nail in the coffin by dispelling the argument by the US ambassador that LNG supplies would enhance the country's energy security. The newspaper noted that natural gas accounts for only 22% of Germany's energy supplies and Russia's gas fills roughly 1/3 of the country's gas needs.

Lastly, the media outlet noted that switching from Russian to American gas supplies is unlikely to improve Germany's security, as the US LNG also "comes with baggage." Handelsblatt specifically recalled Trump's main motto "America first" and the fact that he has started trade wars with several countries, including the EU.

US President Donald Trump earlier heavily criticized European nations for continuing to stick to Russian natural gas supplies and suggested that countries like Germany should abandon the Nord Stream-2 pipeline project. Media reports, citing White House officials, have suggested that the US has been planning to impose economic sanctions against the companies working on the project.

Despite this, President of the European Commission Jean-Claude Juncker has discussed the proposed US alternative to Russian natural gas — LNG supplies — with the US president. Trump later announced that the sides had agreed that the US would lift some of the tariffs that it had earlier imposed on certain European goods in exchange for initiating LNG trade with Europe. Juncker later backtracked, saying that the EU will buy US LNG when the price becomes more "competitive."