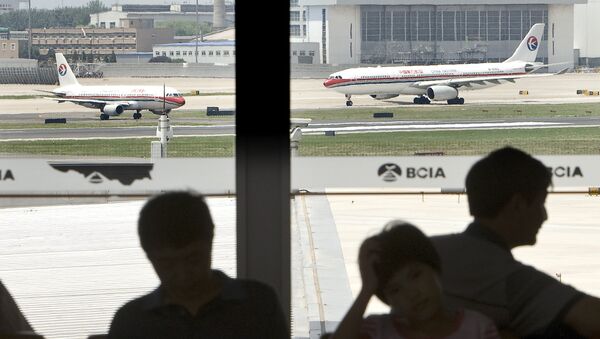 For a Chinese couple, happy married life apparently costs at least the fiancee’s corporate position. Chinese Eastern Airlines did not decide in its staffer’s favor after her boyfriend chose to make the proposal of their lives in the most natural for her surrounding, in the air.

A Chinese stewardess, who was proposed by her kneeling boyfriend right during a flight, has been fired from her job, after a video showing the moment started circulating on social networks in May, according to a Liaoning TV report.

In the now viral clip, a male passenger in a striped shirt is filmed on a flight from Xi An to Yinchuan as he stands up from his knees after popping the question. The touched girlfriend, who appeared to be a flight attendant, apparently accepted the proposal and then used the inflight announcement system to say addressing the intrigued gazing passengers that she “really didn’t know” her boyfriend “would be proposing” on “this flight.” “Thanks for being my witnesses,” she concluded.

A passenger can be heard saying in a voiceover on the video that everybody was deeply moved by the inflight romantic event and even pulled out their smartphones to record the moment as a memory.

The airline, which appeared far less impressed, explained their move to sack the stewardess by stating that it was irresponsible and inconsiderate of her to jeopardize the security of passengers, some of whom appeared to stand up from their seats to have a better view of the gesture and catch it on camera.

"Still, although the proposal may have brightened up this flight attendant's day, in the long run, it probably wasn't the best idea." Sounds like an apologist for a totalitarian regime. https://t.co/nzk20jeHvd @linzasaur

Netizens tend to be divided on the matter, according to an Asia One report. While some condemned the airline’s measure as “heartless,” others stated that in-work duties should by no means be mingled with private affairs, even more so if one’s job is expected to prioritize public safety among other things. One user even suggested the boyfriend is to blame for the job loss:

This is the boyfriend's fault for probably trying to impress with an usual proposal venue. https://t.co/znazP99V8e

One lady, who appeared to be too frustrated with the airline's reaction, stated she would never use the company herself:

Well that's one airline I'll never use. Horrible reaction & there's no way a simple proposal endangered passengers safety. It's not like she left the plane in the middle of a crisis. https://t.co/Gh1dlfZTHt