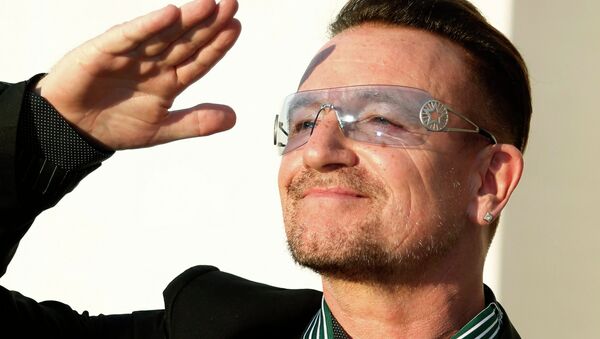 © REUTERS / Charles Platiau
Subscribe
International
India
Africa
An ongoing currency crisis in Argentina is likely to trigger a brutal recession before the end of this year, the government said last month, and widespread poverty and hunger is expected to rise as inflation spirals out of control.

Irish singer Bono, lead vocalist and primary lyricist of rock band U2, recently came out in support of the country in front of fans outside a Paris hotel.

"We really believe in Argentina. We really believe that you're going to show some leadership," the singer said in a video posted on social media by Juan Jose Casanovas, a law student from Buenos Aires. "I think it's very unfair what has happened to the currency. It's […] not right for the Argentine people."

The social media user who posted his brief interaction with the international star and philanthropist was taken aback by his hero's knowledge of — and concern with — current events.

"While he is my hero, it surprised me how he knew that the poorest people are the ones who suffer the most due to our currency affairs," Casanovas said, cited by Bloomberg. "It's remarkable how informed he is on world issues."

Argentina's currency, the peso, continues to plunge against the dollar despite a $50 billion bailout by the International Monetary Fund (IMF).

In June, the IMF granted Argentina immediate access to $15 billion to stabilize its budget and begin implementing a series of economic reforms, as well as access to an additional $35 billion.
The South American nation has accepted a three-year, IMF-backed plan to trim government borrowing, reduce inflation and guarantee independence for the nation's central bank.

In addition, Argentina experienced a severe drought this year, crippling agricultural output and farming sector sustainability, adding to economic woes. Argentine farmers have significant leverage in the nation's government but might now struggle to service debt in the face of a decline in earnings.

In August, Argentine President Mauricio Marci said that he expects poverty in the country to rise this year. The nation's poverty level dropped to 25.7 percent last year — from 30.3 percent in 2016 — but last month's rocketing 31.2-percent inflation rate points to a likely reversal of the trend.

"This devaluation brought a rebound in inflation, and inflation is the largest driver of poverty, and regrettably, we are going to lose some of the gains we have made in poverty reduction," Macri said in August, Sputnik previously reported.